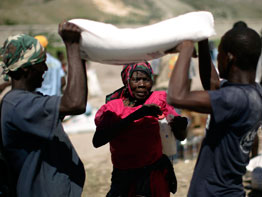 WASHINGTON – The combined hurricanes and tropical storms that have devastated U.S. communities and Caribbean nations in the past few months has exceeded the damage Hurricane Katrina inflicted on New Orleans in 2005, but donations for relief efforts this time are drastically less.

“I believe a combination of the recent economic crisis and the media attention, or lack there of, have presented challenges to us,” said Patricia Hvidston, senior director of development for Catholic Charities USA, based in Alexandria, Va. “We have gotten donations, and we’re grateful to everyone who has made donations, but it’s significantly lower than the response to Katrina.”

For example, donations to Catholic Charities in response to Katrina averaged $890 each from more than 180,000 contributors, but donations in response to the series of hurricanes and tropical storms that have crippled communities along the Gulf of Mexico, Florida and other parts of the country have only averaged $159 each from fewer than 1,000 supporters, Ms. Hvidston told Catholic News Service Sept. 22.

“That’s a remarkable difference,” she said. “It’s clear that people are fearful during these difficult economic times, but I don’t think the message is getting out to the American people about how so many of our citizens have been devastated by these storms.”

Millions of Americans from Texas to Florida were forced to evacuate during the storms that have hit the U.S. since August and many have returned to destroyed homes and no way of earning a living, Ms. Hvidston said.

“It costs a minimum of $1,000 per person to evacuate and many of these people were barely making ends meet already,” she said. “Then, when they returned home, they came back to heavily damaged or destroyed homes, job suspensions or complete job loss, no power or sanitation and no ice, and it’s hot down there.”

Catholic Relief Services has raised around $1 million for emergency aid for Cubans and Haitians affected during this hurricane season, but have fallen $1.5 million short of the agency’s fundraising goal for those Caribbean nations, said Mark Melia, deputy vice president for charitable giving for the Baltimore-based international relief agency.

“We understand that everyone is feeling the impact of the current economic crisis, so we’re doing our best to share information with potential donors about the dire conditions in the Caribbean,” Mr. Melia told CNS Sept. 22. “We’re also trying to assure them that their donations will be going directly to the people in need to help keep them alive.”

“Our focus is on immediate relief right now,” Mr. Melia said. “Response from our donors has been tepid. We’re not getting the response that we have received from previous natural disasters.”

In general, charitable institutions have reported a decrease in donations and financial experts have speculated that U.S. citizens are concerned about their financial well-being in a tough economy.

To address the recent economic shock waves that have rocked the stock market, the Bush administration has proposed the largest government bailout of U.S. financial institutions since the Great Depression.

Despite the current global financial crisis, the poor must not be forgotten, Pope Benedict XVI told pilgrims Sept. 21 at his residence in Castel Gandolfo outside Rome.

“Over the last weeks, several Caribbean countries, in particular Haiti, Cuba and the Dominican Republic, and the southern United States, especially Texas, have been stricken hard by violent hurricanes,” he said. “I want to assure all these dear populations my special remembrance in prayer. I also express the hope that relief assistance quickly reaches the most damaged areas.”

The pope said this was a situation in which “solidarity and brotherhood should prevail over every other aspect.”