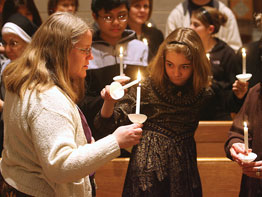 When Jared Angus offered to be the designated driver for friends headed to a nightclub, he had no idea it would lead to a conversion to Catholicism.

While at the nightclub, he met his future wife, Ranette, a devout Catholic born and raised in the Philippines.

When he first visited her house and saw a Bible in a prominent position, they began to talk about religion. He had been raised in various Protestant churches.

“The entire time I thought denominations didn’t matter,” he said.

As the pair became more serious, so did the talk about religion, and Ranette suggested Jared take a Rite of Christian Initiation of Adults (RCIA) class.

“At first I was really turned off by it,” Jared said. “I said, ‘A six-month class? I can walk into any other church and be a member.’” But he was intrigued and began to ask Ranette more questions about her faith – questions she wasn’t always able to answer.

So they decided to take an RCIA class together.

Jared didn’t experience one defining moment when he realized he wanted to be Catholic; rather it was a gradual understanding that this church was a little different.

“There wasn’t a huge, dramatic turn of events,” he said. “I thought, ‘Yeah, I might as well go through with it.’ We’re all Christians, but there’s no disputing the Catholic Church was first. The way I see it, I should be a member of the original church.”

On March 22, Jared, with Ranette as his sponsor, was received into the church at the Cathedral of Mary Our Queen, Homeland. Archbishop Edwin F. O’Brien was the principal celebrant of the Mass known as “the Queen of Vigils.”

“As our church calls into this night’s prayer the basic elements of light, fire and water, this is not a night for scientists or even for theologians,” Archbishop O’Brien said. “We must be willing to be swept, heart and soul and body, into the imagery of this night. Our liturgy is not so much recollecting as re-actualization.”

Indeed, as the catechumens and candidates processed by candlelight into the huge gloom of the darkened cathedral, the liturgy had a timeless feel to it, as if it could have been any century.

“Be well aware that you are a special gift to the church this vigil,” Archbishop O’Brien told those received into the church. “You have no doubt of the Lord’s call.” He urged them to share their faith stories and promised them that the paschal candle will burn through whatever darkness or trial they encounter.

“May each of us be drawn to that light to be reconciled to God,” he said.