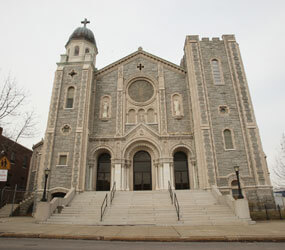 St. Patrick in Fells Point will become a mission of the new parish and offer one Spanish Mass every weekend.

The new parish will retain the Sacred Heart of Jesus name (“Sagrado Corazón de Jesús” in Spanish) and will officially begin serving East Baltimore on the weekend of the Feast of the Transfiguration, Aug. 6-7.

Archbishop Borders School, a dual-language school on the Our Lady of Pompei campus, will relocate to the Sacred Heart campus for the 2012-13 school year.

A letter outlining the changes, written by Archbishop Edwin F. O’Brien and Redemptorist Father Kevin Moley, provincial superior of the Redemptorists, was read at all Feb. 5-6 Masses at St. Michael, St. Patrick, Sacred Heart of Jesus and Our Lady of Pompei.

The letter noted that St. Michael Church needs $9 million in “urgent repairs” – resources the Redemptorists and the archdiocese do not have.

“Sadly, this means that the parish of St. Michael’s in Fells Point will no longer be able to remain open,” the letter said, “and necessitates moving the focal point of Hispanic ministry to Sacred Heart of Jesus.”

Paulist Father John W. Hurley, executive director of the archdiocesan evangelization department, chaired a taskforce that addressed the shifts in East Baltimore during the last four months. He sees the plan as an “evangelizing opportunity on the eastside.”

“All of this reorganization is being done for the sake of the mission of the church,” Father Hurley said.

Maria T.P. Johnson, director of the archdiocesan office of Hispanic ministry, said she was encouraged by the positive response of Spanish-speaking Catholics to the plan.

“You are joining other communities and trying to learn from each other and know each other,” she said.

Johnson estimated that there are about 20,000 Hispanics in Baltimore.

After announcing the plan at the 9:45 a.m. Feb. 6 Mass at St. Michael, Redemptorist Father Robert F. Wojtek, pastor of the Catholic Community of St. Michael and St. Patrick, emphasized that all the parish’s regular programs will continue until the transition.

“We will probably have some other activities that will help us integrate with new community,” he said. “In the meantime, we are open.”

Father Wojtek said rumors that the church has already closed are not true.

Archbishop Borders School, which numbers 160 students, will remain on the campus of Our Lady of Pompei for another school year before moving five blocks to Sacred Heart of Jesus’s old school building in the fall of 2012. The school will occupy the former Bishop Neumann School, which closed in 2004.

Redemptorist Father Gerard J. Knapp, pastor of Sacred Heart of Jesus, noted that the Bishop Neumann building had been used for three years by the Baltimore City public schools but has been vacant for at least two-and-a-half years. It had undergone some renovations and will see more before Archbishop Borders makes the move, he said.

Archbishop Borders became the first dual-language school in the archdiocese in the fall of 2010. Presently, 55 percent of the enrollment is Spanish-speaking and the school aims to make students fluent in both English and Spanish.

Archbishop Borders Principal Cathy Marshall said discussions had been ongoing about moving the school since the spring of 2010.

Marshall said families are “very much in support” of the move a few blocks away. The principal said there is a large, enclosed play area at Sacred Heart.

Marshall said there are many 3- and 4-year-old students at Archbishop Borders, providing a base for growth in the future. She said an expanded Sacred Heart of Jesus can change the landscape of East Baltimore, thanks to partnerships with local organizations.

“It will be a great place and a culturally diverse center for the community,” Marshall said.

Father Knapp said there was strong support among all the affected communities to retain the name, “Sacred Heart of Jesus.” Current parishioners of Sacred Heart, which is now an English-speaking community, are “excited” to welcome newcomers to the faith community, he said.

“People will see it as a challenge because most of the people who will be joining the parish will be Hispanic,” Father Knapp said. “So the culture and the language will pose a challenge to both sides. But I think our people are excited about a growing population and trying to make this one parish.”

Father Knapp said the key to making the plan work will be “mutual hospitality” and remembering a key passage from Scripture: “There is one Lord, one faith and one baptism.”

“Even though we may have different cultures and speak different languages,” he said, “that’s got to be the underpinning of the whole thing for it to work.”