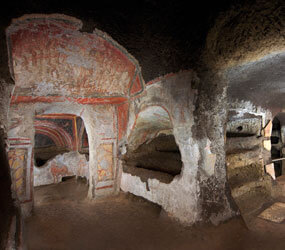 ROME – In the basement of an Italian insurance company’s modern office building, Vatican archaeologists – armed with lasers – discovered important historical evidence about the development of Christian devotion to the apostles.

At Rome’s Catacombs of St. Thecla, in the burial chamber of a Roman noblewoman, they have discovered what they said are the oldest existing paintings of Sts. Peter, Paul, Andrew and John.

Technicians working for the Pontifical Commission for Sacred Archaeology discovered the painting of St. Paul in June 2009 just as the Year of St. Paul was ending.

Barbara Mazzei, who was in charge of the restoration work, said June 22 that she and her team members knew there were more images under the crust of calcium carbonate, but excitement over the discovery of St. Paul in the year dedicated to him led them to announce the discovery even before the rest of the work was completed.

Presenting the complete restoration of the burial chamber to reporters a year later, Monsignor Giovanni Carru said that the catacombs “are an eloquent witness of Christianity in its origins.”

Into the fourth century, Christians in Italy tried to bury their dead near the tomb of a martyr. The walls of the tombs of the wealthy were decorated with Christian symbols, biblical scenes and references to the martyr.

At the Catacombs of St. Thecla, the noblewoman’s burial chamber – now referred to as the Cubicle of the Apostles – dates from late in the fourth century. The arch over the vestibule features a fresco of a group of figures the Vatican experts described as “The College of the Apostles.”

The ceiling of the burial chamber itself features the most typical icon found in the catacombs – Christ the Good Shepherd – but the four corners of the ceiling are decorated with medallions featuring the four apostles, said Mazzei.

Fabrizio Bisconti, the commission’s archaeological superintendent, said that in the decorations of the catacombs one can see “the genesis, the seeds of Christian iconography,” with designs from the very simple fish as a symbol of Christ to the resurrection image of Christ raising Lazarus from the dead.

“This is the time when the veneration of the apostles was just being born and developed,” he said, and the art in the catacombs no longer presented just the martyrs or biblical scenes.

The burial chamber also features frescoes of Daniel in the lion’s den, the Three Wise Men bringing gifts to Jesus, Abraham’s sacrifice of Isaac and a very large wall painting of the noblewoman herself – jeweled, veiled and with “an important hairstyle,” a symbol of status in ancient Rome, he said.

Mazzei said that when restorers first went into the burial chamber in 2008, all the walls were white – completely covered under the crust of calcium carbonate that ranged from a millimeter thick to 4-5 centimeters deep. The Vatican, however, had watercolors and diary descriptions from the 1800s testifying that there were paintings on the walls.

In the past, she said, restorers would use tiny scalpels and brushes to remove the white crust, but some of the paint always came away with it. Restorers were left trying to find the right balance between removing enough to see a faint image of a catacomb fresco and destroying it.

Then along came the laser, Mazzei said.

After attending an art restoration conference and listening to presentations on how lasers were being used on frescoes in buildings above ground, she said she suggested to the Vatican that they gather a team of experts to see how lasers would work in the extremely humid catacombs where almost no air circulates.

“We went slowly and basically set up an experimental laboratory” in the catacombs, she said.

The restoration project was just as painstaking as the scalpel-and-brush method because it involved firing the laser pinpoint by pinpoint across the surface of the cubicle, “but the result is totally different,” Mazzei said.

She said the two-year project to restore the tiny cubicle cost only about $72,000 because many of the consultants donated their time and the laser company gave the Vatican a steep discount.

Bisconti said the Vatican has no plans to open the Catacombs of St. Thecla to the public, although the pontifical commission occasionally gives permission for groups to visit as long as they are willing to pay a licensed guide and escort.