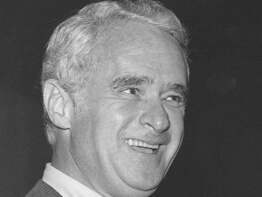 WASHINGTON – Fated to be remembered principally as the vice presidential nominee who had to step down because of treatment for depression, Sen. Thomas Eagleton also made his mark in the Senate as a strong opponent of abortion and harsh critic of the war in Vietnam.

Sen. Eagleton died March 4 at St. Mary’s Health Center in the St. Louis suburb of Richmond Heights from a combination of heart, respiratory and other problems. He was 77.

Although he served in various state offices in Missouri including as attorney general, and spent three terms in the U.S. Senate, Sen. Eagleton’s lasting moment in the spotlight came in 1972 when he was nominated as the Democratic candidate for vice president. Sen. George McGovern of South Dakota topped the ticket.

When it was disclosed by the news media that Sen. Eagleton had been treated in the 1960s for depression with shock therapy, he stepped down, after little more than two weeks as nominee.

In an interview days after being nominated, Sen. Eagleton said he found it particularly interesting how little was being made of his Catholicism only 12 years after being Catholic was treated as a liability during the campaign of President John F. Kennedy.

“The thing that was important in getting me the nomination was such a liability in 1960,” Sen. Eagleton said.

During the 1984 Democratic National Convention, Sen. Eagleton was the favored nominee of a small faction of abortion opponents who cast their votes for him in protest of the overwhelming support for Sen. Walter Mondale of Minnesota, who supported keeping abortion legal.

In the Senate, Sen. Eagleton sponsored a successful amendment to the Family Planning Act of 1970 stipulating that no federal money could be used for abortion as a method of family planning. He also supported a human life amendment to the Constitution, outlawing abortion.

Like his short-term running mate Sen. McGovern, Sen. Eagleton had been a strong opponent of the war in Vietnam.

In a statement, Sen. Edward M. Kennedy, D-Mass., said Sen. Eagleton will “long be remembered for his outrage over the senseless bombing of Cambodia and for his leadership in the anti-war effort.”

After his retirement from the Senate in 1987, Sen. Eagleton went back to Missouri, where he practiced law, taught at Washington University and occasionally provided political commentary on television and to newspapers.
Sen. Eagleton, who was born in St. Louis in 1929, spent a year in the Navy before attending Amherst College in Amherst, Mass., where he earned a bachelor’s degree in 1950. He earned a law degree from Harvard in 1953.

Sen. Eagleton is survived by his wife, Barbara, son Terence and daughter Christin.