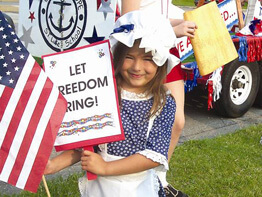 After three consecutive years of top honors at the Dundalk Heritage Independence Day Parade, students and parents from Our Lady of Hope-St. Luke School, Dundalk, are hoping once again to float away with a first-place finish.

Parent Vince Conway has been working on this year’s float, which will be festooned in red, white and blue, as wife Cindy serves on the school’s committee with half a dozen other parents who would like to roll away with first place in the parade’s religious floats category.

“The kids are so full of energy and are so excited about it,” said Mrs. Conway. “Until I started doing this I never realized how many people are watching this parade!”

The school’s float this year includes a flatbed decorated with blue and white material similar to indoor/outdoor carpet and floral arrangements. An old school bus painted Ravens’ colors, purple and black, will pull the flatbed while “America the Beautiful” will boom from speakers. About 40 students marching in shorts and red shirts will accompany the float.

Mrs. Conway said assembling the rolling patriotic tribute “will take hours,” from attaching the base to the flatbed, to soliciting local florists for flowers to represent beauty.

To go along with the 2007 parade theme – “Freedom is Beautiful” – the parent planning committee for the Catholic school’s float has asked participating students to write their definitions of freedom on signs which they’ll carry during the parade.

“We won’t tell them” what freedom means, said Mrs. Conway, a mother of three. “It’s what they come up with. It will be funny to see exactly what they feel freedom is,” especially the younger ones.

On parade day, the Conways and other school families will gather at a Dundalk parking lot before the 8:15 a.m. launch of the two-mile parade which has been a Dundalk tradition since 1935 and begins at Logan Village.

“It is crazy, but it runs smoothly,” said Mrs. Conway describing the pre-parade scenario. Community groups are divided into red, white and blue divisions for organization and placement.