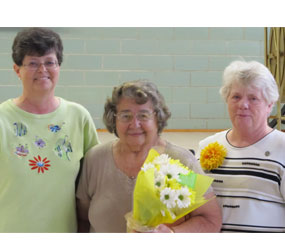 Dorothy “Dot” Rego just completed her 40th year of work in Dundalk’s Our Lady of Hope-St. Luke School library and her 80th birthday is looming.

Although she was recently given a plaque for her years of cataloguing books, she has no plans to slow down.

“Not until they throw me out,” she said playfully.

Since 1955, Rego has given countless volunteer hours to Our Lady of Hope Parish. She was a Den Mother for Boy Scout and Girl Scout troops, a member of the Blue Army prayer group, taught religious education classes for 35 years, helped with the summer Bible program and worked at the school carnival. She is also part of a Bible study group,

“My father used to say I should take my bed over there,” Rego recalled.

Growing up playing the piano, she insists “I’m not an organist,” yet regularly plays the instrument at Our Lady of Hope funerals.

“I’ve never been able to give them a lot of money,” Rego said. “I figured giving time was the best way to give to the parish.”

Rego grew up in St. Elizabeth of Hungary in Highlandtown, marrying Carmen Rego when she was 20. Soon after, the couple began having children. They had six – Nicholas, Lawrence, James, Theresa, Janet and Maria. Soon after Maria was born in the early 1970s, Rego began volunteering at the school.

“I had a playpen in the school library,” Rego said.

When it came time to volunteer for school activities, Rego had one stipulation: she didn’t want to work in the candy closet. A half a lifetime later, she’s still in the library.

A naturally social person, Rego recruited friends to contribute to the parish and school through time.

“I just enjoy people getting together to do things,” she said. ‘I twist arms very gently.”

These days, she spends much of her school library time behind the scenes, in a back cataloging room a few times a week.

While libraries have changed in the information age, Rego still likes using a typewriter for work.

“I don’t know anything about computers,” she said July 22. “I’ll be 80 in two weeks. We’ve had one in the house for the last 30 years, but there are too many other things I like. I’m not up to spending a long time in front of a computer.”

Her husband died 25 years ago, and she said that it was her Catholic faith and all those songs she heard sung by the funeral choir that provided comfort. The daily Mass attendee prays regularly.

Rego plans on being at school when it starts anew Aug. 29. She said there is a familiar sentiment when she arrives home each day from working in the library.