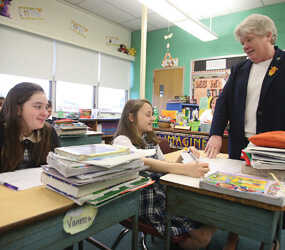 Few recipients of the Doris Musil Award for Excellence in Catholic Education Leadership have ever felt a stronger tie to the honor’s namesake than School Sister of Notre Dame Irene Pryle.

“Forty years ago, I was a rookie teacher and Doris was a veteran,” Sister Irene said April 2, upon receiving the award. “She always had time for this rookie.”

The late Miss Musil, a longtime educator in the Archdiocese of Baltimore, was a standard-bearer at Our Lady of Hope School in Dundalk in 1969, when Sister Irene was hired to teach there.

Sister Irene is completing her 29th year as principal of Our Lady of Hope-St. Luke School. She and her staff call it the “best-kept secret in Dundalk,” but its reputation goes beyond the community.

The announcement of her honor capped a festive evening at Martin’s West, where the Division of Catholic Schools held its 18th annual Teachers’ Awards Banquet.

Hundreds of honorees were greeted individually by Dr. Ronald J. Valenti, superintendent of Catholic schools for the archdiocese. Sister of Notre Dame de Namur Joan Kelly, principal of St. Ursula School in Parkville, was acknowledged for 50 years of service. Others noted for anywhere from 10 to 45 years of service wore feather boas and tooted noisemakers.

Those at a pair of tables including Monsignor Joseph S. Lizor, pastor of St. Luke in Edgemere, and Father John B. Ward, pastor of Our Lady of Hope, jumped at the news of the honor for Sister Irene, which included a check for $500.

Exhaling in her office the next morning, Sister Irene deflected praise to her pastors and staffers, like Janet Myers, a second-grade teacher who had been a student during her first stint there; eighth-grade teacher Ginny Gue; and Kathleen Shea, a secretary whose notion of retirement is working only four days a week.

Sister Irene also pointed to the influence of other School Sisters of Notre Dame who had taught at Our Lady of Hope-St. Luke and Doris Musil herself.

“Doris always put the students first,” Sister Irene said. “She listened to them, and they trusted her. It was all about the students, giving them a Catholic education, an academic challenge and life skills. She so believed in teaching them to be good people.”

Doris Musil was teaching seventh- and eighth-grade math when Sister Irene was hired to teach the same subject to a range of grades.

After a brief stint in Florida, Sister Irene returned to Dundalk.

Two decades ago, St. Luke School had to close. Now her campus is thriving with 290 students, as parents are drawn to a curriculum that includes an all-grades science fair and a community that sends graduates to an assortment of Catholic high schools and colleges like the College of Notre Dame of Maryland and The Johns Hopkins University.

“It’s the air we breathe,” Sister Irene said. “This is holy ground. For over 50 years, this community has been dedicated to providing a nurturing, challenging environment for our students. The Holy Spirit walks these halls.”