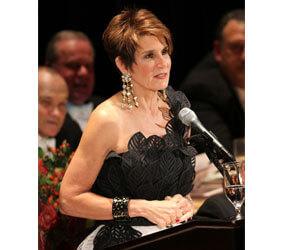 NEW YORK – Whoever commands the next congressional majority after the upcoming midterm election will discover that fortune favors those who put service and duty above party and self, according to Republican political consultant Mary Matalin.

She shared the rostrum with her husband, Democratic political strategist James Carville, at the 65th annual dinner of the Alfred E. Smith Memorial Foundation held Oct. 19 at the Waldorf-Astoria Hotel.

Matalin said the dinner is renowned as a festive gathering of political opposites for a good cause. Noting that Al Smith did not apply a political test to his friendships, she said she and Carville have learned by experience that “some of the dearest people you campaign hardest against over time might become family and friends.”

Matalin and Carville met while they were working for rival candidates in the 1992 presidential campaign. Matalin was deputy campaign manager for political operations for George H.W. Bush. Carville was chief campaign strategist for Bill Clinton. They were married in a civil ceremony in 1993.

The Al Smith dinner honors the memory of the former governor of New York, who was raised in poverty and was the first Catholic nominated by a major political party to run for president of the United States. Proceeds from the $1,500-a-plate event help needy children in Greater New York. The foundation distributed $1.7 million in grants after last year’s dinner.

Matalin and Carville shared the three-tiered dais with New York’s political and philanthropic luminaries, looking out over a sea of 800 formally attired benefactors in the grand ballroom of the storied hotel.

Following a meal of poached lobster and braised short ribs, they poked fun at themselves, each other and candidates in congressional and New York gubernatorial races. After a well-received humorous riff aimed at both Republicans and Democrats, Carville announced in a Louisiana drawl, “There’s too much low-hanging fruit here, folks.”

Matalin said she was received into the Catholic Church at the Easter Vigil this year. “Most converts go straight to confession,” she said, “but I guess if you’re a political consultant, you go right to a microphone.”

She said that Carville has “been a big help in my spiritual journey – and not just in daily martyrdom.”

Turning serious for a moment, Matalin spoke about the example New York Archbishop Timothy M. Dolan sets for his seminarians and said, “The church is filled with honorable, kind, self-sacrificing priests who are pure of heart – and thank God for every one of them.”

Carville jokingly disputed that change is part of Vatican vocabulary, but he said to be Catholic is to believe in miracles. Specifically, he said the church “graciously welcomed me back into its bosom” after Matalin became a Catholic. They then had a Catholic wedding at St. Stephen Church in New Orleans this past April and he was astonished to learn from his sister afterward that his grandparents were married in the same church in April 1910.

In their talks, both Matalin and Carville got comic mileage out of raising their teen and preteen daughters. Matalin said the experience is “all about the peace process.”

Al Smith’s great-grandson, Alfred E. Smith IV, was the master of ceremonies for the event. He said Smith was a man of courage and principle, an independent thinker who was steadfast in his beliefs. The governor “wore his heart on his sleeve, not his ambition,” said the emcee. “Had he not been so open about his religion, he might not have made himself such an easy target for the anti-Catholic bigotry that marred his presidential campaign.”

Archbishop Dolan, host of the dinner, said he was lucky “because I get to spend a big chunk of my life visiting the children helped by the Al Smith Foundation – special-needs kids, homeless infants and their mothers, hungry kids, abandoned children, babies whose very birth is in question due to the poverty and struggles of the mother, kids fed, clothed, loved, embraced and educated because of you.”

He acknowledged his predecessor, Cardinal Edward M. Egan of New York, who was on the dais, and Cardinal William H. Keeler, retired archbishop of Baltimore, sitting at a table of honor.

The invocation was offered by Jesuit Father Timothy J. Cadigan, another great-grandson of Gov. Al Smith. Metropolitan Opera tenor Michael Fabiano sang the national anthem in perhaps the only October performance of that song not shortened by the cheers of baseball fans.

Dinner guests were entertained by the music of the Peter Duchin Orchestra, performed from a balcony overlooking the ballroom.