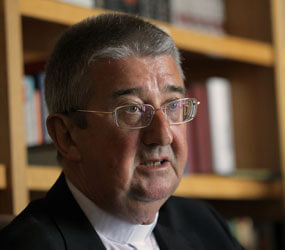 WASHINGTON – Irish society is not just suffering from the sex abuse scandal but from a failure to pass on the faith to the younger generation, said the archbishop of Dublin.

“We have to completely, radically change the way we pass on the faith,” Archbishop Diarmuid Martin told Catholic News Service May 16. “Our parishes are not places where evangelization and catechesis are taking place.”

The archbishop traveled to Washington to present the Order of Malta Inaugural Lecture, “Faith and Service: the Unbreakable Bond.” During his speech and in remarks to CNS beforehand, he spoke of the declining practice of the faith in Dublin – 18 percent of Catholics regularly attend Sunday Mass – and of the need to give young people responsibility in the parish to reinvigorate them.

Archbishop Martin has served in Dublin since 2003 and presided over the uncovering of hundreds of past cases of sex abuse and the mishandling of priest abusers, but he says the problem goes deeper than abuse.

“If people are being prepared for the sacraments by people who don’t frequent the sacraments, there’s a real problem there,” Archbishop Martin told CNS.

He reiterated what he has said often in the past, that “young Irish people are among the most catechized and the least evangelized.”

“Unless we address it, we’re not going to have a next generation of young Catholics,” he said.

“We’re suffering from some of the products of being a mass Catholicism in the past. We’re still living, in some ways, as if that were the case today,” he said.

In his speech near the Georgetown University campus, Archbishop Martin said he believed the secularization of Irish society was quite advanced, and he spoke of what it means to live as a Christian citizen.

“If we start out in … reflection on the place of faith in our culture with the conviction that God’s grace is present and can be found even within a world marked by human sinfulness, then our vision of the place of the faith in society changes, and the entire framework for the presence of Christians in society takes on a new shape,” he said.

“Christian commitment means getting your hands and your shoes dirty,” he said. “The Christian in society is not just another social commentator, but a witness to another way of living.”

He said Christian commitment “must not be limited to the occasional outburst of global solidarity” after natural disasters or “the more militant enthusiasm engendered around protest meetings.”

“Faith and service constitute an unbreakable bond,” he said.

“Defense of the faith is about living the faith without being afraid,” he said, adding that it means knowing that faith can improve all aspects of life.

In his CNS interview, Archbishop Martin spoke of the need for training volunteer laypeople to start relieving priests of some of their extra tasks so they can focus on priestly duties. Laypeople “bring a richness to ministry,” he said, and where he has full-time laypeople working in parishes, they have increased the numbers of volunteer laypeople.