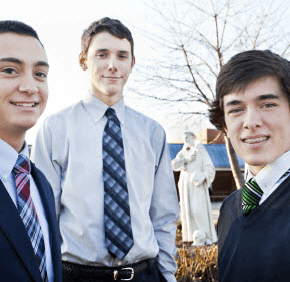 It wasn’t just arithmetic that was on the minds of first graders at Archbishop Borders School in Highlandtown during a morning math class Sept. 12. Words such as “uno,” “dos” and “tres” flew through the air as youngsters quizzed one another with flash cards – speaking only Spanish while solving basic adding and subtracting problems.

As the only school in the Archdiocese of Baltimore to employ a “dual-language” curriculum, Archbishop Borders offers an immersion program in both Spanish and English. All students in the program, which is initially being taught in kindergarten and first grade, receive instruction in some classes solely in Spanish and others solely in English.

The program will expand to other grades in coming years, with the goal of making Spanish-speaking and English-speaking children fluent and literate in both languages by the time they graduate.

Luque said children are absorbing the languages without difficulty.

“They are able to learn very quickly at a young age because their brains are clean and there’s no fear,” said Luque, dual-language program director. “It’s very easy for them. They are totally open, and it’s really incredible to see.”

Approximately 65 percent of the school’s 130 students come from Spanish-speaking families. There are also several students whose native language is Mandarin Chinese or French.

Cathy Marshall, principal, said most of the Spanish-speaking students are already bilingual when they come to the school – though many lack reading and writing skills in their native tongue.

“Immersion is the key,” Marshall said, noting that children become skilled in oral conversation in both languages within a matter of months.

English-speaking students will find benefits in becoming bilingual and biliterate, she said. Not only will it help their academics, she said, it will give them a leg up when they reach high school, college and the job market.

“What a gift to be able to offer a child two languages,” she said. “They’ll be ready to step into high school and maybe even take on a third language.”

If a child answers a question in English during a Spanish-only class, Luque repeats the answer in Spanish so the student learns how to say it in that language, Luque said. The program encourages a culture where both languages are used inside and outside the classroom, with children offering support to one another.

“If one of my (English-speaking) classmates doesn’t understand a word in Spanish, I explain it to them,” said Jesus Reyes, a 6-year-old first grader. “I help my mother at home with English.”

“I want to learn more,” he said, “so that when people talk to me in Spanish, I’ll understand them.”

Archbishop Borders recently relocated several blocks from Our Lady of Pompei to the campus of Sacred Heart of Jesus – Sagrado Corazón de Jesús in Highlandtown, a bilingual faith community headed by the Redemptorists. The former Bishop Neumann School building, which had been closed for several years at Sacred Heart, underwent major renovations to become the new home for Archbishop Borders. The renovations were funded with help from the newly launched archdiocesan capital campaign, “Embracing our Mission – Shaping our Future.”

The archdiocese has committed $1.5 million to the first two stages of the renovations at Archbishop Borders, which have already been completed. Phases three and four of additional improvements will be completed in the next two summers, with archdiocesan officials noting that the scopes and budgets for those phases are to be determined.

“Embracing our Mission – Shaping our Future” is a $100 million archdiocesan-wide campaign. Fifty million dollars is earmarked in support of Catholic education at schools throughout the archdiocese, with $25 million designated for a tuition-assistance endowment and $15 million for capital improvements.

At Archbishop Borders, where 97 percent of students qualify for the federal free- and reduced-fee lunch program, such aid is indispensable.

“Our whole existence depends on that generosity,” said Marshall, noting that tuition is $4,900. “It makes Catholic education affordable. We have families of two or three children. They could never go to Catholic school without assistance.”