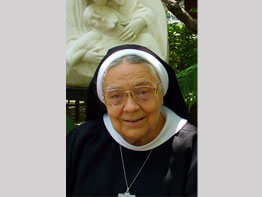 LOS ANGELES – The nun walked deliberately up to the ambo at St. Martin of Tours Church in Los Angeles and adjusted her spectacles. Holding a neat sheaf of pages, she began her mission appeal.

Sister Mary Paul Watts spoke on behalf of her order, the Sisters of Our Lady of China, and the work the sisters do in remote rural medical clinics and the education they provide at a junior college the order runs.

But the story of Sister Mary Paul is about more than her journey from parish to parish to talk about her order’s need for funds. It’s about how she came to be the only American member of a Chinese religious order.

In 1957, Gloria Watts, a recent Marquette University nursing graduate, boarded a Chinese freighter and embarked on a lifelong journey that took her from landlocked Illinois to the island of Taiwan. Ms. Watts spoke no Chinese, but she had treasured a dream since childhood.

“I grew up Methodist,” she said. “A Chinese doctor spoke to our church one Sunday, and I said, ‘I want to be a missionary in China.’“

In college, Ms. Watts became a Catholic. Then she met two members of the Sisters of Our Lady of China. The sisters invited her to be a lay missionary on Taiwan after she graduated.

The order was founded in 1940 in mainland China by Cardinal Thomas Tien Ken-sin of what was then Peking, now Beijing. During the 1940s and ‘50s many of the order’s members fled the communist persecution, eventually settling in Taiwan.

“They had a hospital on the mainland,” Sister Mary Paul recalled, “And they carried a microscope all the way out of China. Sometimes, they hid in the fields during the day and only traveled at night. It took a long time. When they finally got out, it was an antique.”

Her trip by freighter took 18 days, she said. “There were 12 passengers, but only two of us were Westerners. The captain read the Encyclopedia Britannica to pass the time. I only learned two things in Chinese: a song, ‘The Girl From Ali Shan,’ and ‘Hen mai li’ (‘It’s beautiful’). When I arrived at our mud and bamboo motherhouse, I kept saying, ‘Hen mai li.’“

Working alongside the sisters in their rural clinic in central Taiwan, it wasn’t long before she decided to join the order, taking the name Sister Mary Paul.

Although she was – and still is – the only American to join the community, Sister Mary Paul said she was completely accepted by the others, all Chinese sisters.

“They’d deny themselves sometimes to give me things. For example, they couldn’t afford to buy eggs, but they’d buy one for me,” she said. “I kept refusing it, but I got sick and so I had to eat it.

“The only real problem was the language barrier. When I knew I wanted to join the order, I told a priest there, who spoke a little English,” she said. “He collected the mother general and she met with us, crying. Then I realized that Father had mistranslated. He told them I didn’t want to be a sister and that I wanted to leave! They really wanted me to be among them.”

In the 1960s, Sister Mary Paul, other sisters and an American laywoman who was a nurse, Mary Ann Heim, started rural mobile clinics. They treated 150 patients a day for three days at a time, often coping with poor roads, limited supplies, mudslides and earthquakes.

Later, with the help of benefactors, the sisters established a new motherhouse in Chiayi, Taiwan, a hospital and a clinic, which provides the only round-the-clock, 365-days-a-year medical care to the aboriginal population in the mountains.

They also run the Chung-Jen Madonna Junior College of Nursing, Health Sciences and Management, offering vocational, moral and ethical education. The school trains sisters who remain on the mainland to manage a nursing home in northern China.

Although she is now 76 years old and suffers from a degenerative spine, Sister Mary Paul cannot imagine ever retiring.

“I want to die like (Gen. Douglas) MacArthur, with my boots on. We need money for the junior college,” she said. “And, the sisters on the mainland (China) need a well so badly; the water supply is unpredictable, and they don’t get any funding from other sources.”

Modern technology, especially e-mail, makes communication a bit easier. But there are still some loose ends in her efforts to stay in touch with people.

“I’d love to find out what happened to Mary Ann Heim,” she said. “The last card I sent was returned as ‘moved, no forwarding address.’“

But through her mission work, the American nun from Taiwan did reconnect with one person from her past – this reporter’s mother, Joyce Nalefski. It turns out the two women were classmates at St. Theresa High School in Decatur, Ill., in a class of 45 students. They graduated in 1950.

“Time has gone by so quickly,” Sister Mary Paul said, but “the Holy Spirit has been our constant companion.”

Editor’s Note: Sister Mary Paul Watts can be contacted by sending her an e-mail at smpgjw@gmail.com. For information about sending a tax-deductible contribution to her order, send an e-mail to the U.S.-based Mission Circle No.112 at clfhif@juno.com.