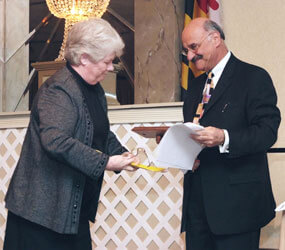 Just as Dr. Valenti, superintendent of Catholic Schools, was expecting to present a principal with the Doris Musil Award for Excellence in Catholic Education Leadership, Sister Irene turned the tables on him and announced to a crowd of 500 that Dr. Valenti was this year’s recipient of the high archdiocesan honor.

Sister Irene, principal of Our Lady of Hope-St. Luke School in Dundalk and last year’s Musil awardee, smiled at a bewildered Dr. Valenti as he received a prolonged standing ovation. Superintendent for two decades, Dr. Valenti is retiring from the post June 30.

“You’ve left me speechless,” Dr. Valenti said. “There is no award that means so much to me as the one you just gave me tonight.”

Named in honor of a former associate superintendent and accompanied by a $500 check, the Doris Musil Award recognizes Catholic school leaders who have an abiding love for children, a commitment to sharing the Gospel message and an ability to teach as Jesus did.

Dr. Valenti, who presented awards to teachers who have served for between 10 and 60 years, praised the work of Catholic educators. In a year when the archdiocese announced the consolidation of 13 schools, the superintendent said the commitment to Catholic education will continue.

“Doors may close,” he said. “Buildings may be shuttered. Halls may not again hear the laughter of children. But there is one thing that remains constant: the message to teach as Jesus did has been done and it has been done well and it will continue to be.”

Dr. Valenti said he strove to live by the educational philosophy of Parker Palmer, who defined good teaching as hospitality to the young.

“We as Catholic educators want our students to feel welcomed, cared for, respect, loved and, most especially, we welcome them as Christ that lives in them,” said Dr. Valenti, choking up as he surveyed familiar faces in the crowd. “It has been my joy and my honor and my privilege.”

At the start of the banquet, principals of the 13 consolidating schools were recognized for their service to the archdiocese. They too received a standing ovation from their peers.

“It was one of those moments where you could feel yourself filling up,” said Christopher Ashby, principal of Holy Family School in Randallstown – one of the consolidating schools. “I think the tough guy in me maintained it, but as I looked at the other principals, that was the moment where just about everybody was tearing up.”

Ashby said he felt respect and appreciation from his fellow educators.

“It really did let me know that we’re not alone,” he said.

Mercy Sister Mary Joannes Clifford, who was honored for 62 years of service in Catholic education, said the banquet was a “wonderful” recognition for teachers. Sister Joannes is the only educator who remains on staff at Mercy High School from when the school opened in 1960. She has served as a math teacher, a math department head, moderator of the math club, advisor, director of admissions, director of alumni affairs and currently works as alumni director emeritus. She also founded what is now known as Friends of Mercy, a support group for single, divorced, separated and widowed people.

Sister Joannes has been present for Mercy students long after they graduate. For many years, she attended the funerals of the loved ones of graduates to show them that Mercy was there for them.

During the banquet, awards for teaching excellence and the Colleen and Erin Marlatt Scholarships were also presented.