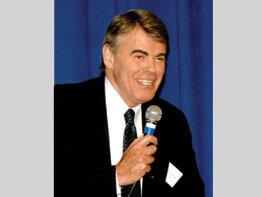 While many lawmakers in Annapolis expressed sadness that Richard J. Dowling is retiring as head of the Maryland Catholic Conference, some will be elated.

“A lot of lawmakers will be relieved he’s gone,” said Sen. Nancy Jacobs, a Harford and Cecil county Republican. “On the issues, he was like a dog with a bone. He was a formidable opponent to those legislators who were on the other sides of issues.”

Mr. Dowling served for nearly 25 years as executive director of the Catholic Conference, the public policy making arm of the state’s Catholic bishops. He will step down sometime this year and be succeeded by Mary Ellen Russell.

Sen. Jacobs said Mr. Dowling masterfully made his case, in a respectful manner befitting his position as a representative of the church.

“We have legislators who are full of themselves and will give him a hard time about things when he’s testifying,” Sen. Jacobs said. “They would go after him, but he always maintained his cool under fire.”

Many state laws are the result of Mr. Dowling’s lobbying. His accomplishments include bans on the execution of juveniles and persons with mental retardation, the prohibition of assisted suicide and the establishment of the state’s earned income tax credit.

“A lot of the proposals to help the vulnerable in society passed due to Dick’s involvement,” said Del. William Frank, a Baltimore County Republican. “We have a very good safety net in Maryland because the MCC has been front and center pushing for it.”

Del. Frank highlighted Mr. Dowling’s role in preventing the lifting of the statute of limitations on sex abuse cases, which the Catholic Conference argued would have unfairly targeted the Catholic Church, possibly resulting in the drastic downsizing of parishes, schools and outreach ministries.

“A lot of times, we’re playing defense in Annapolis,” Del. Frank said. “Sometimes a better way to measure success is by counting the bad bills we prevented from becoming law. On that score, Dick ranks up there at the top.”

Sen. James E. DeGrange Sr., an Anne Arundel County Democrat, said Mr. Dowling was a force behind the passage of textbook and technology funding for nonpublic school students. Sen. DeGrange also worked with the Catholic Conference on a business tax credit bill benefiting nonpublic and public school students and teachers – legislation, he said, that is closer than ever to becoming law.

When Sen. Alex Mooney, a Frederick County Republican, held the swing vote on getting a death penalty ban out of committee two years ago, the Catholic lawmaker faced intense lobbying from the Catholic Conference.

Kevin Appleby, a former Catholic Conference staffer who now works as director of migration and refugee policy for the U.S. Conference of Catholic Bishops, said Mr. Dowling “set the standard for Catholic advocacy in this country.

“While he was able to work both sides of the aisle, he never shrunk from difficult fights or pulled any punches,” Mr. Appleby said.

Gov. Martin O’Malley, a Democrat, called Mr. Dowling the “voice and the face of the Archdiocese of Baltimore in Annapolis. There are very few people that worked as hard in Annapolis as Mr. Dowling did.”