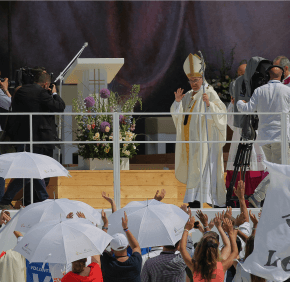 KRAKOW, Poland – Take risks and do not let life’s obstacles get in the way of encountering the true joy and life that Jesus can give, Pope Francis told more than 1 million young people.
“Don’t be afraid to say ‘yes’ to him with all your heart, to respond generously and to follow him,” the pope told pilgrims at the closing Mass July 31 for World Youth Day. “Don’t let your soul grow numb, but aim for the goal of a beautiful love which also demands sacrifice.”
“When it comes to Jesus, we cannot sit around waiting with arms folded; he offers us life. We can’t respond by thinking about it or ‘texting’ a few words,” he told the young people, thousands of whom had spent the night camping at an area dubbed the Field of Mercy.
The lack of sleep and morning heat seemed to have little impact as the young men and women energetically waved their flags and ran as close as possible to the popemobile to greet Pope Francis.
In his homily, the pope reflected on the Gospel story of Zacchaeus, a reviled tax collector who, due to his short height, climbed a sycamore tree to see Jesus.

Pope Francis is seen on a large screen before celebrating the World Youth Day closing Mass July 31 at the Field of Mercy in Krakow, Poland. (CNS photo/Bob Roller)
The obstacles Zacchaeus faced — including his short stature — the pope said, can also “say something to us.”
“Even today we can risk not getting close to Jesus because we don’t feel big enough, because we don’t think ourselves worthy. This is a great temptation; it has to do not only with self-esteem, but with faith itself,” he said.
By not accepting themselves and their limitations, Christians deny their “real stature” as children of God and see themselves as unworthy of God’s love.
At the same time, he said, people will try to convince Christians that there are others who are unworthy of God’s love.
“People will try to block you, to make you think that God is distant, rigid and insensitive, good to the good and bad to the bad,” he told the young people. “Instead, our heavenly Father ‘makes his sun rise on the evil and on the good.’

He demands of us real courage: the courage to be more powerful than evil by loving everyone, even our enemies.”

The pope noted that Jesus looks at all people with the same gaze he looked at Zacchaeus, not taking into account his sins, wealth or social standing.
“God counts on you for what you are, not for what you possess. In his eyes the clothes you wear or the kind of cell phone you use are of absolutely no concern. He doesn’t care whether you are stylish or not, he cares about you! In his eyes, you are precious and your value is priceless,” the pope said.
Pope Francis arrives in procession to celebrate the closing Mass of World Youth Day at Campus Misericordiae in Krakow, Poland, July 31. (CNS photo/Paul Haring)
Another obstacle, the pope continued, is the “paralysis of shame,” one that Zacchaeus overcame by climbing the sycamore tree at “the risk of appearing completely ridiculous.”

Pope Francis encouraged the young men and women to not be ashamed in bringing “everything to the Lord in confession, especially your weaknesses, your struggles and your sins.”
“Don’t be afraid to say ‘yes’ to him with all your heart, to respond generously and to follow him! Don’t let your soul grow numb, but aim for the goal of a beautiful love which also demands sacrifice,” the pope said.
Zacchaeus’ final obstacle, he noted, did not come from within but from the “grumbling of the crowd” who first blocked him and then criticized him” for being a sinner.
God challenges Christians to be more powerful than evil by loving everyone and to risk being ridiculed for believing “in the gentle and unassuming power of mercy,” he said.
As he did with Zacchaeus, Jesus looks beyond appearances and faults to the heart — something young people are called to imitate, the pope said.
“Don’t stop at the surface of things; distrust the worldly cult of appearances, applying makeup on our souls so we seem better than we are,” he said. “Instead, establish the most secure connection, that of the heart that sees and transmits goodness without tiring.”
Although the Mass brought the World Youth Day celebrations to an end, Pope Francis invited the youth to continue along the path that began with their pilgrimage to Krakow and bring the remembrance of God’s love to others.
“Trust the memory of God: his memory is not a ‘hard disk’ that saves and archives all our data, but a tender heart full of compassion that rejoices in definitively erasing every trace of evil,” the pope said.
Before concluding the Mass with the recitation of the Angelus prayer, the pope invited the youths to carry the “spiritual breath of fresh air” back to their countries and communities and “wherever God’s providence leads you.”
That same providence, he concluded, is “one step ahead of us” and “has already determined the next stop in this great pilgrimage begun in 1985 by St. John Paul II!”
“So now I am happy to announce that the next World Youth Day — after the two that will be held on the diocesan level — will take place in 2019 in Panama,” Pope Francis told the youths.
The Panama delegation Krakow greeted the announcement with shouts of joy — dancing, bouncing and high-fiving each other.
Pope Francis invited bishops from Panama to join him at center stage in blessing the crowd.
Also see: