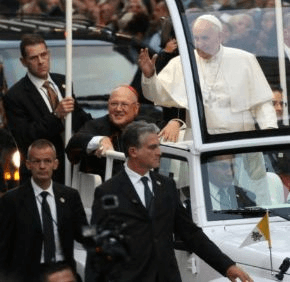 KRAKOW, Poland – Pope Francis told young people they are not called to be couch potatoes, living boring lives, but should leave their mark in history and not let others determine their future.

Like a soccer match, life “only takes players on the first string and has no room for benchwarmers,” the pope young people at the World Youth Day prayer vigil July 30. “Today’s world demands that you be a protagonist of history, because life is always beautiful when we choose to live it fully, when we choose to leave a mark.”
Organizers said up to 1.6 million youths from around the world – many of whom walked more than four miles to the Field of Mercy – attended the prayer vigil with the pope.
Arriving in his popemobile, Pope Francis waved at the throngs of young people who stretched out their hands.

Stopping at a wooden Door of Mercy inscribed with the words “Jesus, I trust in you” in five languages, he was greeted by several young men and women. Hand-in-hand with the pope, they entered through the door.

The pope then surprised the youths by inviting them aboard the popemobile. Visibly emotional and wide-eyed, the youths boarded the vehicle and joined Pope Francis, waving at the crowd.

Pope Francis gives the thumbs up as he arrives with World Youth Day pilgrims to a July 30 prayer vigil at the Field of Mercy in Krakow, Poland. (CNS Photo/Paul Haring)
After taking his place on the stage, young people from Poland, Syria and Paraguay gave their experiences of finding hope in the midst of disbelief, war and addiction.

Natalia, a young Polish woman from Lodz, spoke of her experience of encountering the love of God through the sacrament of reconciliation after 20 years of “not having anything in common with the church.”
“Going to confession, I was convinced of having irredeemably lost eternal life. Instead, I had heard that God had made everything evil I had done disappear forever,” she said.
Rand Mittri, a 26-year-old Syrian woman from Aleppo, shared the pain and sorrow that comes from seeing her city “destroyed, ruined and broken.”
“The meaning in our lives has been canceled. We are the forgotten city,” she said.
Mittri went on to describe how she and many families live in constant fear of leaving their homes, not knowing when disaster will strike.
“Perhaps we will be killed that day. Or perhaps our families will. It is a hard and painful feeling to know that you are surrounded by death and killing, and there is no way to escape, no one to help,” she recounted.
Despite the horror she faces daily, Mittri said she learned her faith in Jesus “supersedes the circumstances” and that with each passing day she believes “God exists despite all of our pain.”
“Jesus, I trust in you,” she concluded.
Miguel from Asuncion, Paraguay, gave the final testimony of the evening, recounting his 16-year struggle with drug addiction.
Beginning to experiment with drugs at age 11 and imprisoned for a crime by 15, Miguel said he continued committing crimes until he was eventually imprisoned for six years.
A priest, he said, took him to a halfway house in Brazil, Fazenda de la Esperanza, where he learned to live as a family with his fellow companions.
“I recovered 10 years ago and today I am responsible for ‘Quo Vadis’ house of Fazenda de la Esperanza in Cerro Chato, Uruguay, for the past three years,” he said.
Between the testimonies, dancers performed. A woman depicting St. Faustina Kowalska looked on in disbelief as youths in glass boxes were fixated on their cellphones and tablets. A young woman dressed in white danced around them, beckoning them to come out.
Another performance on the beauty of forgiveness recreated the scene in which St. John Paul II sat down with would-be assassin Mehmet Ali Agca in his prison cell and forgave him.
After listening to their experiences, Pope Francis addressed the youths, calling on them first to not be absorbed by their cellphones and computers and to think about those, like Mittri, who live through violence and war daily.
“They have a name, they have a face, they have a story, they are close at hand,” he said forcefully.
Recalling Natalia and Miguel’s experiences, the pope thanked them for sharing their struggles and said they are a “living sign of what God’s mercy wants to accomplish in us.”

World Youth Day pilgrims wait for Pope Francis to arrive for a prayer vigil July 30 at the Field of Mercy in Krakow, Poland. (CNS Photo/Bob Roller)
In a world beset by conflict, terror and death, he continued, brotherhood and communion remain the only true response.

The pope then invited everyone present to hold hands and pray silently, asking them to “place before the Lord your own battles, the interior struggles that each of you carries in his or her heart.”
Silence descended on the field as the pope bowed and joined the youths in prayer.
Pope Francis continued his address by warning the pilgrims to not fall into a “paralysis that comes from confusing happiness with a sofa.” This sofa that promises comfort, safety and relaxation, he said, instead is an “insidious form of paralysis” that makes young men and women become “dull and drowsy.”
Pope Francis encouraged the pilgrims, reminding them they are not called to “vegetate” in life but to leave a mark in the world.
“When we opt for ease and convenience, for confusing happiness with consumption, then we end up paying a high price indeed: We lose our freedom,” he said.
He invited them to instead embark on the “path of ‘craziness’ of our God” that urges Christians to practice the corporal and spiritual works of mercy.
Like Miguel, who discovered God’s calling by helping others at the halfway house, the pope said God is also calling them, encouraging them to dream.
“He wants to make you see that, with you, the world can be different. For the fact is, unless you offer the best of yourselves, the world will never be different,” he said.
However, the pope also called on adults to teach younger generations “how to live in diversity, in dialogue, to experience multiculturalism, not as a threat but an opportunity.”
Young people, he said, must “be our accusers if we choose a life of walls, a life of enmity, a life of war.”
“Have the courage to teach us that it is easier to build bridges than walls. We need this,” he said.
See also: