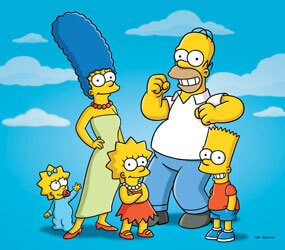 WASHINGTON – It’s not every day that the Vatican newspaper declares that a fictional character from the world of television is a Catholic – and a cartoon character at that.

But that’s precisely what L’Osservatore Romano did in early October when it asserted that Homer Simpson, the patriarch of the 21-season Fox sitcom “The Simpsons,” is a Catholic. Oh, and bratty son Bart, too.

The Vatican’s fascination with “The Simpsons” began last December, when L’Osservatore Romano said that “the relationship between man and God” is one of its most important themes and that it often mirrored the “religious and spiritual confusion of our times.”

On Oct. 16, La Civilta Catolica, a Jesuit weekly, published an article titled “‘The Simpsons’ and Religion,” which said the series “is one of the few television shows for kids in which the Christian faith, religion and questions about God are recurring themes.”

The Simpsons “say grace before meals, and in their way, believe in heaven,” said the essay’s author, Jesuit Father Francesco Occhetta.

Then came the L’Osservatore Romano opinion piece the next day. “Few people know it, and he does everything he can to hide it, but it is true: Homer J. Simpson is a Catholic,” the Vatican newspaper said in the article, headlined “Homer and Bart are Catholic.” Father Occhetta later told Catholic News Service in Rome he thought the Vatican newspaper had exaggerated his point but added that the sitcom shows Homer “is open to the question of faith and God.”

Mark Pinsky, former religion writer for the Orlando Sentinel, wrote the book “The Gospel According to the Simpsons” in 2001. As the series has become TV’s current prime-time entertainment program marathon winner, he has updated his book as well as a companion guide for leaders of study groups.

Homer being a Catholic is “mostly a case of wishful thinking on the part of L’Osservatore Romano,” Pinsky said.

He described the episode which has gotten the TV and the Catholic blogosphere talking.

Bart gets thrown out of Springfield Elementary yet again, so “they try Catholic school. Bart takes to the bloody martyr stories,” Pinsky said. “Homer, goaded by Marge, goes to the church to remove Bart from this setting, and he’s seduced. Homer being Homer, he’s seduced by a pancake dinner and bingo, which he sort of turns around from being very hostile. Then he becomes very curious about it. Then Liam Neeson (the voice of the priest in the episode) explains confession and absolution, which Homer thinks is the best deal in the world. … The wine’s another draw.”

Pinsky added, “Homer enrolls with Bart in a sort of RCIA (Rite of Christian Initiation of Adults) course, and of course, he misunderstands parts of it. … He’s attracted to Catholicism for what we might say are all the wrong reasons.”

Marge rounds up Reverend Lovejoy and the Simpson’s evangelical neighbor, Ned Flanders, to conduct an intervention.

Pinsky alluded to some spats writers for “The Simpsons” have had with Bill Donohue, head of the Catholic League for Religious and Civil Rights. Donahue, in an Oct. 26 phone interview with CNS in Washington, said the arguments were legitimate, but “I would hardly regard the show as anti-Catholic, if it’s been around for 20 years. It would hardly raise my ire. I would have more concern about (talk show hosts) Joy Behar and Bill Maher than ‘The Simpsons.’“

Donohue laughed as he was asked whether he would welcome Homer Simpson into the Catholic faith with open arms. “It’s really rather silly,” he said. “What this smacks of to me is the craven need on the part of some Catholics for the bouquets that may be bestowed on them by the secular media. This is not the way to improve relations, if my hunch is right.”

“The show is so inoffensive to us we don’t have it on our regular schedule of taped shows” the league monitors, Donahue said.

But what about for his own personal viewing enjoyment? “Quite frankly, I’m up at 5:30 in the morning to get to work at 7:15. I get to bed early on Sunday night. I don’t even stay up late to watch the (New York) Yankees when they’re in the playoffs.”

Perhaps the Vatican media-watchers will note the “Simpsons” episode from last season in which the Simpsons went to the Holy Land and Homer, ravaged by heat and thirst, imagines himself the Messiah – as do several others in the tourist party.

Pinsky, in his book, notes that when you’re drawing animation cels (short for celluloid), you can be anywhere you want without having to build expensive sets. So a church naturally comes into the Simpsons’ world. On the flip side, he told CNS, “because the characters never age, there are only so many situations you can do.”

“The Simpsons” has touched upon mainstream Protestantism, Buddhism, Hinduism and Judaism in its long run.

“The group that comes in for the most ribbing are the Unitarians, and that’s maybe because they (writers) know they won’t complain,” Pinsky said, noting that in an episode where Homer is a missionary in the South Pacific and is asked: “What’s the one true faith?” He responds, “If it’s Unitarians I’ll eat my hat.”

He also recalled a scene in another of the show’s 400 episodes that had a backyard ice cream social. “There’s a table for toppings, each one with a denominational name on it, The Unitarians? It’s empty, there’s nothing there.”

Pinsky said “The Simpsons” “is a show that rewards intelligence. The smarter you are, the more funny you will find it.”