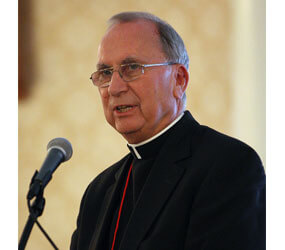 WASHINGTON – The federal budget crunch should not be eased by cutting programs that help the poor, refugees and the unemployed in the United States or those struggling to survive in developing nations, warned church leaders in letters to Congress and responses to President Barack Obama’s budget proposal.

“In a time of economic crisis, the poor and vulnerable are in greater need of assistance, not less,” said Bishop Stephen E. Blaire of Stockton, Calif., chairman of the U.S. bishops’ Committee on Domestic Justice and Human Development, in a Feb. 14 letter to Congress. “Preserving the national security of the country is without doubt imperative, but we cannot secure the nation while at the same time furthering the insecurity of the poor and vulnerable in our midst.”

A second letter the same day from Ken Hackett, president of Catholic Relief Services, and Bishop Howard J. Hubbard of Albany, N.Y., chairman of the Committee on International Justice and Peace, dealt with international budget concerns. The two noted that the proposed continuing resolution for the current federal budget year includes cuts adding up to 26 percent of funding in programs for international assistance, but only 2.6 percent in cuts for the overall budget.

“Shared sacrifice is one thing;” said Hackett and Bishop Hubbard, “it is another to make disproportionate cuts in programs that serve the most vulnerable. It is morally unacceptable for our nation to balance its budget on the backs of the poor at home and abroad.”

One group of faith leaders played off the Valentine’s Day date and called on Congress not to cut the heart out of programs that keep families healthy.

“As Americans celebrate Valentine’s Day, vital programs that support families and the most vulnerable now face drastic budget cuts,” said Sister Simone Campbell, a Sister of Social Service and executive director of Network, the Catholic social justice lobby, in a statement issued by religious leaders of various faiths. “Sound fiscal judgment makes perfect sense, but cutting the heart out of effective programs that help mothers, children and hard-working citizens is both cruel and misguided.”

In a separate statement responding to the president’s 2012 budget proposal, Father Larry Snyder, president of Catholic Charities USA, said the umbrella social services organization “recognizes that social service initiatives will not be immune to those difficult decisions” in dealing with the massive federal budget shortfall.

“However, as the president and members of Congress alike look for savings within the budget, we reject the notion that those most vulnerable among us should feel the greatest impact of future reductions.”

He urged policymakers to achieve budget cuts by improving government efficiency first. Father Snyder cited data showing that as much as 40 cents of every dollar of federal assistance programs for financially struggling Americans is lost to bureaucratic red tape.

“Look for ways to achieve recommended cuts by creating and maximizing bureaucratic efficiency first,” he said, “rather than by simply sacrificing vital services on the ground, resulting in a further strain on families who are already barely getting by.”

Congress is simultaneously dealing with several budget-related efforts. First on the priority list is ensuring that funding continues past March 4 for current federal operations, now only possible because of continuing resolutions that have extended spending authority of the 2010 budget until after the new Congress took office. The most recent continuing resolution expires March 4. If there’s no additional continuation or a budget approved by then, the federal government would shut down all but emergency operations.

Under a proposal released by the House Republican leadership late Feb. 11, social services programs and international aid would come in for significant cuts, said Kathy Saile, director of domestic social development in the Department of Justice, Peace and Human Development of the U.S. Conference of Catholic Bishops.

She told the audience at the Catholic Social Ministry Gathering Feb. 14 that should the House proposal pass relatively intact, it’s unlikely to be approved by the Democratic-controlled Senate, so negotiations will have to sort out the differences.

Congress is also beginning work on the budget for the coming fiscal year, which starts in October. The White House released the president’s proposal for that budget Feb. 14.

Saile told the 300-plus Catholic social ministry workers at the annual conference that rather than cutting funds for the segment of society least able to lobby for themselves – the poor – Congress should put “everything on the table,” including budgets for defense and other areas that are all but untouched by current proposals.

“In times of fiscal restraint, shared sacrifice demands that the entire budget be examined, including defense,” said Hackett and Bishop Hubbard in their letter. A strong military is only one component of national security, they said, adding that addressing problems of poverty, corruption and hunger-related illness can also help sideline the societal dissatisfaction that can breed terrorism.

Both that letter and the one from Bishop Blaire on domestic spending welcomed components of the House 2011 budget proposal that would end current programs that include funds for abortion. Specifically, the House bill would restore the Mexico City policy prohibiting foreign aid funds for groups that perform or promote abortion and end a subsidy to the U.N. Population Fund, which supports abortion and involuntary sterilization in China.

It also would restore a ban on abortion funding in the District of Columbia, which Bishop Blaire said he supports.

But both letters also described other funding cuts in the GOP proposal as life-threatening, such as slashing funds for drugs for people with HIV and tuberculosis and for refugees and disaster victims abroad, and a $1 billion cut to U.S. community health centers, which would “deny health care for nearly 10 million poor and vulnerable people.”