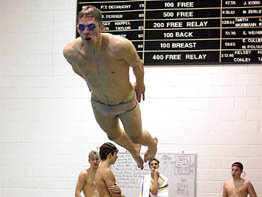 The Loyola Blakefield, Towson, swim team proved they knew the ‘reason for the season’ when they began their Christmas break by diving into charity work.

Thirty-six swimmers participat­ed in a 100-mile swim at the school Dec. 20-21, raising more than $5,000 for the new Cristo Rey Jesuit High School in Baltimore. Proceeds will be presented to Father John Swope, S.J., president of the co-educational school set to open in 2007.

The first swimmer hit the water at 9 a.m. sharp on Dec. 20 and the last mile was clocked in 27 hours later.

“It’s just a fun event, especial­ly when we get close to the finish mile,” said team captain and chair­man of the event, senior Andrew Balhoff.

Balhoff chose Cristo Rey High School after his sister, a Notre Dame Preparatory, Towson, student shared that Father Swope spoke at their school about the mission and vision of the Jesuit’s newly formed school.

The 100-mile swim was started in 1997 by Loyola swimmer Joe Cur­reri who was interested in starting a water polo team at Loyola.

“Joe came to me about a water polo program and I told him there was no money in the budget for a brand new program. That’s when Joe came up with this fundraiser idea,” said Loyola head coach Keith Schertle, who is in his 13th season with the Loyola swim program.

The Dons were able to purchase their caps and equipment that year, but from that point forward the char­ity swim became more about rais­ing money for worthy causes, keep­ing his swimmers in shape over the break and the ultimate team bond­ing experience.

“We started with 10 kids years ago and it has just grown and grown, and now we have over 30 swimmers par­ticipating this year,” said Schertle.

Lap after lap, mile after mile, the student-athletes and their parents are the sole organizers of the event and make it fun from start to finish for the swimmers with food, music and camaraderie for the 30-hour commitment. Last year, the Dons supported the Ronald McDonald House.

The Dons are defending a 13-year MIAA championship title honor heading into the 2006-2007 season.

Stepping up for the Dons this sea­son are Balhoff, a free-styler, and seniors Tim Eberhart, Alexander Motsiopoulos, Andrew Quesenber­ry, and Zac Cooper.

Freshmen Tyler Elfert and Hugh Davidson are also very talented swimmers and are providing for a healthy inter-squad competition as the season presses on. The Dons head into the new year with a 2­0 MIAA A Conference lead, handily defeating Mount St. Joseph, Irving­ton, and St. Paul in Brooklandville in December.