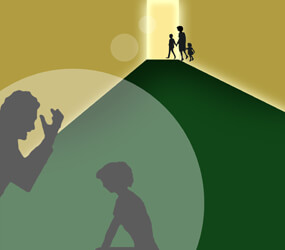 WASHINGTON – On any given night Sister Betty Adams knows that usually she will see five or six women in the shelter she oversees for women fleeing domestic violence in Sierra Vista, Ariz., 80 miles southeast of Tucson.

When the number climbed to 13 women and 12 children one day early in May and remained just as high after two weeks, Sister Betty knew the storm she and her staff had been expecting at the network of three Catholic Charities-run shelters she oversees near the Mexican border had finally hit.

That’s because stress caused by a lack of work and the inability to find new work can lead spouses to take out their frustrations on partners. Mix in alcohol or drugs and the situation can worsen.

Even though the nation is anchored in its 18th month of recession, shelter directors at several Catholic Charities programs said the usual expanding bubble of domestic violence cases seemed to take longer to develop this time around.

“We were wondering if women were afraid to leave because of the economy and finding housing and supporting their children and if women were choosing financial security over safety,” Sister Betty, a member of the Congregation of St. Joseph, told Catholic News Service.

In the Diocese of Portland, Ore., Karen Janes, manager of domestic violence services in the Catholic Charities Hispanic program, continues to wait for her staff’s caseload to rise. She knows it’s only a matter of time before it does.

In the most recent Catholic Charities USA survey of agencies around the country, 13 of 40 programs which responded reported significant increases in the number of clients who experienced domestic violence or sexual assault during the first three months of 2009.

That response goes hand in hand with the growing number of people, especially first-timers, who need assistance with food, utility bills, rent and house payments.

“Financial strain has always been a trigger for unhealthy behavior, and we’re definitely seeing that,” said Linda Robb, clinical director of the counseling program for Catholic Charities in Richland, Wash., in the Diocese of Yakima.

“As the economy gets worse and people are losing their jobs, the stress level is going up in the home,” she said. “In that the person’s self-esteem is tied up in their job and as that self-esteem is depleted, the propensity for drug and alcohol abuse goes up.”

Fortunately, in Richland the economy has remained fairly stable. Home to the Hanford Nuclear Reservation, a Department of Energy facility that produces nuclear fuels and materials, the region has not experienced the same rate of job decline that much of the nation is seeing.

For Robb, that’s a blessing. Had it not been for the steadiness Hanford brings to southeast Washington, she fears her caseload would be much larger.

The upcoming end of the school year, too, may have influenced women to ride out their predicament for several weeks so they would not face the prospect of disrupting their children’s lives more than they were already troubled by marital discord, Sister Betty explained.

Complicating the picture for people such as Robb and Sister Betty are double-digit funding cuts from state and local governments, which are seeing their own crises as revenues decline because of higher unemployment and lower income tax collections.

At the Arizona network, which includes shelters in Douglas and Nogales, $75,000 in state funding was lost in a budget balancing move by the state Legislature. Sister Betty expects to lose another $120,000 from the state’s $600,000 allocation by the end of the year as Arizona officials struggle with a growing deficit brought on by rising unemployment.

Similar cuts are being experienced across the country, forcing program managers to reduce services for domestic violence victims; such services include counseling, support group meetings, advocacy work in the legal system, job training and child care so a woman can go to work if she’s fortunate enough to find a job.

Sister Betty fears such cuts in services may lead women to stay in an abusive relationship, thinking that at least she has a place to stay for herself and her children.

The one area Sister Betty refuses to cut is the number of shelter beds. Her program has 40 beds in Sierra Vista, 24 in Douglas and 14 in Nogales. Right now the program is at capacity in all three communities.

When a woman decides to leave an abusive situation with children in tow, the last thing she should hear is that there’s no room for them in a safe place, she said.

“The barriers facing families, especially women with children, are even harsher than they were in January,” she said.