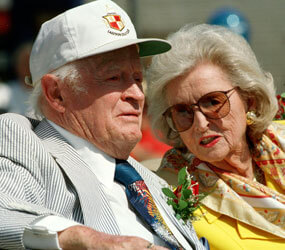 LOS ANGELES – Dolores Hope, a lifelong Catholic who was the widow of comedian Bob Hope and an entertainer in her own right, died Sept. 19 at age 102 at her home in Toluca Lake outside of Los Angeles.

A family spokesman said she died of natural causes.

“Dolores Hope was a Catholic of deep and abiding faith, and her own spiritual journey was her highest priority,” Los Angeles Archbishop Jose H. Gomez said in a statement. “Her deep life in Christ was the spring board for her charitable giving to countless ministries, apostolates, and works of mercy across the country and around the world.”

“Both the entertainment world and the church have lost a woman of profound faith, gifted musical talent, and dedication to the betterment of peoples worldwide,” he said. “The death of Dolores Hope leaves a huge void in Southern California.”

With her husband Mrs. Hope supported numerous Catholic causes over the years and continued to do so after his death in 2003. Among other efforts the couple were the benefactors of the Chapel of Our Lady of Hope of Pontmain, France, at the Basilica of the National Shrine of the Immaculate Conception in Washington.

News reports said funeral services for Mrs. Hope would be private, followed by burial next to her husband at the Bob Hope Memorial Garden in the San Fernando Mission in Mission Hills.

Mrs. Hope and her husband were longtime members of St. Charles Borromeo Parish in North Hollywood. But it wasn’t until 1996 that Bob Hope officially became a member of the Catholic Church. She and Bob had been married 69 years when he died July 27, 2003. Dolores was praised as an instrument in her husband’s baptism into the church.

“Dolores has always known the gift of faith is the greatest gift you give,” said Cardinal Theodore E. McCarrick, at a memorial Mass celebrated for Bob in August 2003 at the national shrine. The cardinal, then archbishop of Washington, was a longtime friend of the Hopes.

Born Dolores DeFina May 27, 1909, to an Italian father and an Irish mother in Manhattan’s Harlem neighborhood, Dolores grew up in the Bronx. After her father’s death, she and her sister were raised by their mother.

During the 1930s, Dolores began a singing career as Dolores Reade on the advice of her agent. In 1933, after appearing at a Manhattan nightclub, she was introduced to Bob Hope.

The two were married Feb. 19, 1934, and she joined his vaudeville act. They later adopted four children – Nora, Linda, Kelly and Anthony, who died in 2004. The family moved to Hollywood in 1938 so Bob could launch his film career. Dolores had left show business so she could stay home to raise their children.

In the 1940s, Dolores began helping her husband on his tours entertaining U.S. troops overseas and she would continue to do so for more than 50 years. In 1990, she was the only female entertainer allowed to perform in Saudi Arabia. It was Bob’s last trip to entertain U.S. troops.

At age 83, she revived her singing career and recorded her first compact disc, “Dolores Hope: Now and Then.” She followed this with three additional albums and also recorded a Christmas CD with Bob entitled “Hopes for the Holidays.”

Among the many Catholic charities the Hopes supported was Catholic Relief Services, the U.S. bishops’ overseas relief and development agency. In 1999, the couple matched actor Paul Newman’s $250,000 donation to CRS to assist Kosovar refugees with a quarter-million dollars of their own.

They were among the first contributors of the Big Shoulders Fund, a nonprofit Chicago organization whose contributions go to inner-city Catholic elementary and secondary schools. In 1988, they received the first Big Shoulders Award.

In his statement, Archbishop Gomez noted that the Archdiocese of Los Angeles benefited regularly over the years with the couple’s “generous donations to innumerable projects and programs,” including the Cathedral of Our Lady of the Angels building program.

Mrs. Hope received many honors over the years, including the Patronal Medal bestowed by the national shrine in Washington and The Catholic University of America; the National Council of Catholic Women’s first Distinguished Service Award; and the Cardinal Award, presented by Cardinal Roger M. Mahony, when he was archbishop of Los Angeles.

She was one of the first women in the world to become a Dame Commander with Star of the papal order of St. Gregory the Great, bestowed by Pope John Paul II.

“All of us were gifted through her deep faith and her untiring spirit to help improve the lives of so many people everywhere,” Archbishop Gomez said.