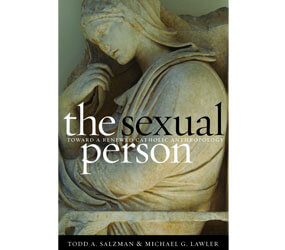 WASHINGTON – In their 2008 book, “The Sexual Person,” theologians Todd A. Salzman and Michael G. Lawler “reach a whole range of conclusions that are contrary to Catholic teaching,” the U.S. bishops’ Committee on Doctrine said in a 24-page critique.

The document, dated Sept. 15 and made public Sept. 22, said the theologians’ methodology “marks a radical departure from Catholic theological tradition” and their conclusions “cannot provide a true norm for moral action and in fact are harmful to one’s moral and spiritual life.”

The committee specifically cited errors in the book’s conclusions that homosexual acts, premarital sex, contraception and artificial insemination can be morally acceptable, in contrast to church teachings.

Salzman chairs the theology department at Creighton University in Omaha, Neb., and Lawler, who retired in 2005, is a professor emeritus there.

The doctrine committee, chaired by Archbishop Donald W. Wuerl of Washington, said the critique was prompted by “the pastoral danger that readers of the book could be confused or misled, especially since the book proposes ways of living a Christian life that do not accord with the teaching of the church and the Christian tradition.”

“The issues treated in ‘The Sexual Person’ are indeed vital matters for the life of the church in our time,” it added. “They should be thoroughly studied and discussed by theologians as part of their service to the church and to society. …

“New presentations of the truth of Catholic moral teaching are needed today, but the proposal contained in ‘The Sexual Person’ is seriously flawed and falls short of the goal of theological investigation, ‘fides quaerens intellectum,’“ the committee said. The phrase is Latin for “faith seeking understanding.”

The doctrine committee’s review of the book, subtitled “Toward a Renewed Catholic Anthropology” and published by Georgetown University Press, came at the request of the current and former archbishops of Omaha. Now-retired Omaha Archbishop Elden F. Curtiss first criticized the views of the two theologians in 2007, saying they “cannot be considered authentic Catholic teaching.”

Jesuit-run Creighton University said in a Sept. 22 statement that it “accepts as authoritative” the committee’s statement and “presents to its students as Catholic doctrine only that which is deemed to be true doctrine.”

“As a comprehensive university, Creighton is nonetheless mindful of its obligation to honor the academic freedom of individual faculty members,” it added. “Indeed, in his April 2008 address to Catholic educators, Pope Benedict XVI ‘reaffirm(ed) the great value of academic freedom.’“

The statement also thanked Archbishop George J. Lucas of Omaha for the “positive working relationship between the archdiocese and the university” and said the university “strives to, and is confident that it will, maintain this positive relationship.”

In its critique, the doctrine committee said it would have been easy to simply “cite the texts presenting magisterial teaching” on the issues raised in the book, but it decided it would be more helpful “to examine the basic presuppositions of the alternative moral theology proposed in ‘The Sexual Person.’“

For example, Salzman and Lawler “strive to show that what the Scriptures say” about certain sexual behaviors “is not relevant to our present questions,” the committee said.

“The basic problem of the use of Scripture in ‘The Sexual Person’ is that the authors treat scriptural statements as so historically conditioned that they have no relevance for subsequent ages,” it added. “Such an extreme position is neither correct as a philosophical assertion nor compatible with the Christian faith.”

The committee also cited problems with the authors’ interpretation of natural law, their rejection of a dualistic view of the human person and their reliance on experience as the foundational criterion for moral judgments.

“There is need of a standard above one’s personal experience – provided by natural law, Scripture and the magisterium,” the document said. “Salzman and Lawler, however, explicitly reject the idea of a hierarchy among the sources of moral knowledge. … In this approach, there is no overall authority to resolve conflicts among the sources; there can only be ‘dialogue.’“