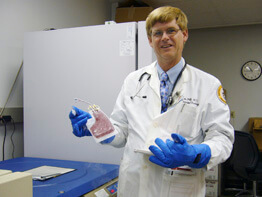 MAYWOOD, Ill. – About 10 years ago, Holly Becker’s future appeared bright. At 24, she had just graduated from college, moved out of her parents’ home and taken a job in sales and marketing. But then something went terribly wrong.

She started running temperatures of 105.4 degrees and she couldn’t eat. At first her doctors thought she had the flu, then mononucleosis. Soon she couldn’t get out of bed; she couldn’t work and had to move back home.

Doctors diagnosed Becker with stage 4 non-Hodgkin’s lymphoma. The cancer had already spread to her spleen, liver and bone marrow. She spent six months undergoing chemotherapy without success.
She was in desperate need of a bone-marrow transplant, but no donor was available.
“I was really as bad as somebody could get,” she told the Catholic Explorer, Joliet diocesan newspaper, in a telephone interview.

Running out of options, she went to the Loyola University Medical Center in Maywood for an umbilical-cord-blood stem-cell transplant.

“Cord blood has opened the door to curing patients who otherwise would die,” Dr. Patrick Stiff, director of Loyola’s Cardinal Bernardin Cancer Center, told the Catholic Explorer. “We actually have transplanted patients in whom the only other option was a hospice program.”

The use of cord-blood stem cells does not involve the destruction of embryos, and the Catholic Church supports their use. They are taken from an umbilical cord after birth and used to treat cancers originating in bone marrow or in the lymphatic system when a traditional bone-marrow transplant is not an option.

According to a statement released by Loyola, “umbilical-cord-blood transplants at Loyola are curing or slowing the progression of many cancers.”

Stiff, also a professor of medicine and pathology at the Loyola University Chicago Stritch School of Medicine in Maywood, said cord-blood stem cells “are more immature and have a better growth potential” than other adult stem cells. Doctors still consider living-donor, bone-marrow stem cells to be the best treatment option, but cord-blood cells are getting close, he added.

Ten years ago, Stiff and his team of researchers developed a new technology to grow cord-blood stem cells outside the body. In the past doctors could only get enough stem cells to treat a child. Now they can grow enough for an adult.

In 1998 Becker was one of the first patients to be treated in the Chicago area.

Although at the time she didn’t fully understand how bad it was, “pretty much my only chance for survival would have been to have a cord-blood transplant,” she said.

She spent five very difficult weeks at Loyola, trapped in isolation where she felt “completely horrible.”
People around her had to wear masks, and she couldn’t “do anything.”
Before receiving the cord blood, she received full-body radiation treatments twice daily and high-dose chemotherapy to wipe out her immune system.

“It was obviously the worst thing I’ve ever been through in my entire life,” Becker said, crediting her family and friends for helping her through the ordeal.

She said getting the cord blood was easy. “It’s just like a blood transfusion,” she said.

Stephen Sprague, a New York man who has been free of leukemia for 10 years after a cord-blood transplant as part of Stiff’s study, now advocates for cord-blood usage. He said that in spite of the law signed by Bush an infrastructure is still lacking to help women donate their umbilical-cord blood. Most hospitals treat cord blood as medical waste, he said.

Stiff agrees. “There is cost associated with getting cord-blood units into the cord-blood bank at the hospital level, and right now there’s no mechanism to recoup those costs.”

“They do have the capacity to produce pretty much anything, and I guess that’s part of the work that we’re interested in pursuing,” he said. “We don’t need to go to embryonic stem cells. There are obvious differences, but we think that the differences are so minor as to never warrant the use of embryonic stem cells for any research or clinical use.”