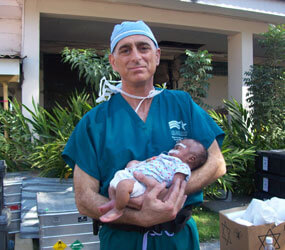 It’s in Dr. Dan Bochicchio’s nature to answer the call for help.

The Baltimore VA Medical Center anesthesiologist and member of the Army National Guard has helped treat thousands of people over the years.

But, watching the aftermath of the magnitude-7 earthquake that rocked Haiti Jan. 12, Bochicchio didn’t feel his instincts kick in.

“I looked at it and said that doesn’t look nice,” Bochicchio said. “I wasn’t looking at it and thinking I was going to go.”

The VA Maryland Health Care System previously enrolled Bochicchio, 52, in the disaster emergency personnel system after a request by the United States Health and Human Services Department. Bochicchio, a parishioner of Our Lady of Grace in Parkton, had experience dealing with field medicine because of his military experience.

When President Barack Obama decided to send federal government personnel to Haiti, the 52-year-old doctor got a call to assist in the effort.

“I was surprised,” Bochicchio said. “Having said that, I’m like a racehorse. If you ring the bell, I tend to come out of the gate.”

By Jan. 26, he was en route to Haiti. He went as part of an 80-member International Medical Surgical Response Team (IMSuRT), which went to Gheskio, six miles from Port-au-Prince.

He was told to simply bring toilet paper and a tent to sleep in at night.

Once he arrived, Dr. Bochicchio saw how primitive Haiti was and how limited the medical supplies were in the medical tent area that was receiving patients. The team saw 1,250 patients in 10 days, many with long-standing injuries that required amputation.

“We saw things on patients that we call the natural progression of disease,” Bochicchio said. “We saw patients that must have had things for years because there’s no way it gets this way unless it goes undiagnosed or treated. People came in having never seen a doctor.”

Bochicchio worries about the possibilities of airborne diseases in Haiti, particularly during the rainy season, which starts in April.

“I think we really did some good, no doubt,” he said.

Bochicchio often showed orthopedic surgeons how to give sedations and how to administer pain medication.

“That’s not the optimum way to doing things,” he said of the rush to keep up with patients, “but when they have six or seven procedures waiting to be done and we’re going to be busy in the OR for the next six or seven hours, you’ve got to adapt. If you don’t adapt, improvise and overcome the obstacles then you become ineffective.”

One day the team used all its available oxygen and was forced to use the operating room’s natural air to get through procedures.

The team became attached to one infant boy who was suffering from tetanus and struggling to breathe. He came with just a patient number and no name. One of the team members, who was from Virginia, called the boy Jefferson and the name stuck.

“He was pretty sick,” Bochicchio said. “He was on a ventilator. We were hand ventilating, without machine, for a day-and-a-half. We didn’t think he would survive.”

The team gave up hope that he could breathe on his own and went to bed thinking he might not live. When they awoke, however, they found the boy still breathing

“We’re not sure what’s going to happen to baby Jefferson, but we think he’s going to be the next president of Haiti,” the doctor said. “There was a reason why that kid survived.”

Bochicchio returned to the United States in early February, where he continues to be inspired by his veteran patients at the Baltimore VA Medical Center.

He saw a similar determination in Haiti, as people celebrated Mass regularly, despite the hardships.

“It puts things in perspective for you about what’s important,” he said. “The only thing that gets you through that is faith. If you don’t have faith, then when your material world falls down around you, you have nothing left.”