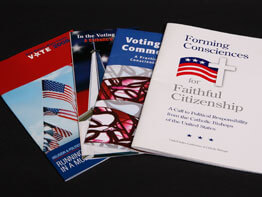 WASHINGTON – If a group of Catholics were to sit down to read four or five of the “Catholic voter guides” in circulation before Election Day, it wouldn’t be surprising if they ended the session more confused than when they began.

Various Catholic organizations, religious communities, bishops individually and collectively, and even some individual Catholics have put into writing their best advice on how Catholic social teaching should guide decisions in the voting booth.

“Catholics must strive to put in place candidates, laws and political programs that are in full accord with nonnegotiable moral values,” says the California-based Catholic Answers Action, the cultural and political action arm of the apologetics and evangelization organization Catholic Answers. In its “Voter’s Guide for Serious Catholics,” the group names five issues as nonnegotiable – abortion, euthanasia, embryonic stem-cell research, human cloning and same-sex marriage.

The Maryknoll Office for Global Concerns, on the other hand, sees the election in much broader terms in its voter guide, called “Loving Our Neighbors in a Shrinking World.”

“Peace. Security. Racial equity. Economic well-being. A healthy environment. Human dignity. These are the basic needs of every human being and of the earth,” it says. “We encourage candidates to make explicit their commitment to the global common good.”

“In the Voting Booth: A Catholic’s Guide,” a brief brochure written by Greg Erlandson of Our Sunday Visitor, quotes liberally from “Forming Consciences for Faithful Citizenship,” the U.S. bishops’ 2007 document on political responsibility, providing guidance in a question-and-answer format.

“In a world of prudential judgments, it is quite possible that well-formed and educated Catholics may differ on what is the best choice to make in the voting booth,” Mr. Erlandson writes. “But we are called to draw upon the teachings of our faith in coming to our decisions, not party loyalty, self-interests or political slogans.”

Most of the guides rely heavily on quotations from “Faithful Citizenship,” which calls on Catholics to view candidates’ stands in light of Catholic teaching, giving priority attention to “the intentional taking of innocent human life, as in abortion and euthanasia.”

The bishops urge voters to avoid “two temptations in public life” that can distort church teaching.

“The first is a moral equivalence that makes no ethical distinctions between different kinds of issues involving human life and dignity,” they say. “The direct and intentional destruction of innocent human life from the moment of conception until natural death is always wrong and is not just one issue among many.

“The second is the misuse of these necessary moral distinctions as a way of dismissing or ignoring other serious threats to human life and dignity,” they add. “Racism and other unjust discrimination, the use of the death penalty, resorting to unjust war, the use of torture, war crimes, the failure to respond to those who are suffering from hunger or a lack of health care, or an unjust immigration policy are all serious moral issues that challenge our consciences and require us to act. These are not optional concerns which can be dismissed.”

One guide titled “Faithful Catholic Citizenship Based Upon the Gospel of Life” uses the logo developed by the U.S. Conference of Catholic Bishops for its “Faithful Citizenship” program but clearly rejects the bishops’ nuanced approach.

Some of Mr. Terry’s followers have been arrested for distributing their brochures outside Catholic churches without permission.

The best advice for a Catholic voter might come from Erlandson of Our Sunday Visitor, whose brochure adapted from “Faithful Citizenship” offers four steps to take before entering the voting booth:

• “1. Inform yourself about the church’s teachings. …

• “2. Inform yourself about the issues. Read the Catholic press and listen to the candidates. See where the candidates stand on critical moral and social issues.

• “3. Seek input from Catholics you respect.

• “4. Pray. Take your concerns, worries and confusion to the Lord and ask for his guidance.”