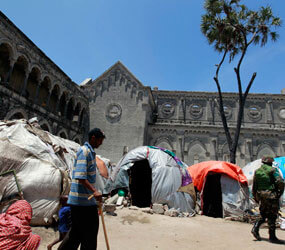 NAIROBI, Kenya – Djibouti Bishop Giorgio Bertin, who oversees Catholics in neighboring Somalia, said he is happy that the ruins of Mogadishu’s only Catholic cathedral are housing hundreds of displaced Somalis.

“In Mogadishu there are hundreds of camps for displaced people. The cathedral area is one of them,” the bishop said in an email interview. “I think that at least 300 could easily fit in, but I have no real figures.”

The U.N. officially has declared a famine in parts of Somalia, including the internally displaced communities in Mogadishu, the Somali capital. More than 100,000 Somalis poured into the capital searching for food within a two-month period this summer.

Somalia has had a civil war since 1991, and the famine-hit areas are plagued by a lack of security because of a weak central government and the presence of various political factions that control parts of the country. The instability and resulting violence severely limit the delivery of humanitarian assistance.

Hundreds of thousands of Somalis have fled to Kenya.

Bishop Bertin said the best solution would be to help the displaced people within Somalia, “but the problem is often that where they are either they are unsafe or we cannot reach them.”

In 1989, Italian-born Bishop Pietro Salvatore Colombo of Mogadishu was killed at his cathedral. After the murder, the Vatican eliminated the post and now oversees Somalia through neighboring Djibouti.

“The cathedral has not been used since Jan. 9, 1991, when it was ransacked” and set on fire, said Bishop Bertin. “It remained open to anybody and was never locked.”