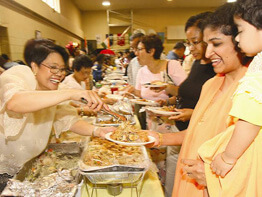 St. Gabriel, Woodlawn, was alive with the music and languages of different cultures June 3, as some 700 people celebrated their diverse gifts as a Catholic community.

St. Gabriel parishioners are ethnically diverse, representing cultures including Filipino, African, Indian and many more. About six years ago the parish council developed the idea of uniting parishioners one Sunday a year to celebrate their cultural differences and similarities in Christ, explained Monsignor Thomas Phillips, pastor. He said Diversity Day is an opportunity for parishioners to experience a different culture’s dress, food, music and dance.

“It is nice to experience the different cultures,” said parishioner Lovely Thomas, as she stood with her family dressed in a cream, gold and green wrap dress. “It is important that we can all come together.”

There was standing room only at St. Gabriel as young children carrying flags from different countries approached the altar followed by Bishop Mitchell Rozanski, eastern vicar, Monsignor Phillips and Deacon Paul Mann. The parishioners sang their praises while many were dressed from head to toe in their culture’s traditional garb.

A group of women dressed in matching blue African dresses danced and sang their way to the altar while one woman carried the Book of the Gospel and placed it in the bishop’s waiting hands. The second reading was said in 11 languages including French, Spanish, Twi, Malaysian and more.

“Today we celebrate the one faith that united us,” said Bishop Rozanski during his homily. “We are all many different cultures and languages but we are all one in Jesus.”
The prayer of the faithful was also spoken in more than five different languages and each parishioner was asked to say the Our Father in their native tongue. After communion and before the final blessing the community shared in the African tradition of the Thanksgiving Procession, which gives everyone an opportunity to express their gratitude to God by placing a donation into a basket at the front of the altar.

As Bishop Rozanski and Monsignor Phillips exited the church, they led the parishioners to the John Paul Regional School Hall where a blessing was placed over the people and food.

“Events like this represent the universal Catholic church,” said Pamela Ellis as her daughter Jessica Ellis added, “This shows that the church is growing.”
Both women said they enjoy trying all the different foods but they really enjoy the rich and spicy Indian food. Mary Clare Gretz and her daughter are parishioners form St. Augustine , Elkridge, but she was asked by a friend to come and experience Diversity Day at St. Gabriel. Ms. Gretz said she wants to expose her daughter to things she wouldn’t normally try and this was the perfect place to do just that.
Jorge Valdvia said it is important for people to come together as one group even if they speak different languages or celebrate Mass in different ways.
“We live in America but you will see people from all over the world here,” said Mr. Valdvia.