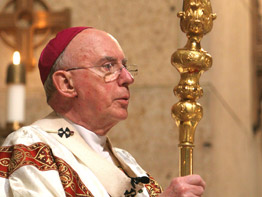 NEW HOPE, Minn. – Father Terry Rassmussen, pastor of St. Joseph Church in New Hope, finished the reading, closed the Book of the Gospels and stepped away from the ambo. From the congregation, Ginny Untiedt stepped forward.

Clad in a white robe, Ms. Untiedt bowed as Father Rassmussen laid his hands on her head and blessed her. She walked to the ambo and began preaching for the last time.

As many as 29 parishes in the Archdiocese of St. Paul and Minneapolis have used lay preachers at Mass during the past 25 years. In January Archbishop Harry J. Flynn instructed pastors to discontinue the practice.

He gave the date of his retirement as head of the archdiocese – May 2 – as the time by which parishes should develop “a pastoral plan” to end lay preaching at Mass.

Pope Benedict XVI accepted Archbishop Flynn’s resignation on his 75th birthday May 2; 75 is the age at which canon law requires bishops to turn in their resignation. As coadjutor, Archbishop John C. Nienstedt automatically became head of the archdiocese.

In his January letter to pastors, Archbishop Flynn referenced the 2004 Vatican instruction “Redemptionis Sacramentum,” which called eucharistic lay preaching – a nonordained person reflecting on the Gospel reading at the place in Mass usually reserved for a homily by a priest or deacon – a liturgical abuse.

Only an ordained person should preach after the Gospel at Mass, Archbishop Flynn said.
Many lay preachers have expressed “enormous grief and anger” over the archbishop’s directive, said Patricia Hughes Baumer, who co-founded the lay preaching training organization Partners in Preaching with her husband, Fred, in 1997.

Proponents of lay preaching argue that canon law allows the practice and that both the congregation and pastors benefit from hearing Gospel reflections from diverse voices.

For many lay preachers, some of whom have been preaching in the archdiocese for more than 25 years, the biggest question was why now?

Archbishop Flynn told The Catholic Spirit, the archdiocesan newspaper, that he was aware of a few parishes practicing lay preaching and that local leaders in the lay preaching movement were aware of his disapproval. He wrote the January letter only after becoming aware that the number of parishes with lay preachers was larger than he realized, he said.

Archbishop Flynn said he has explained to Baumer on two occasions why lay preaching during the Mass cannot be promoted. He said canon law does not support the practice of lay preaching at the homily during Mass. The education, formation and ordination of priests and deacons make them uniquely suited to preach during Mass, he said.

“There has to be that kind of training and theological background that even a person with a master’s degree in theology would not have,” he said. “The church does not want people just standing up there and giving opinions or even things they’ve read in books.”

Rather, he said, the homily addresses “what is the clear teaching about this mystery of our faith?”

To allow a nonordained person to preach would also interrupt the action of the Mass, he said. The Scriptures make it clear that it was the role of the presbyters to preach, he added.

“To preach the Gospel is an extremely important part of the mission of any priest – I cannot overemphasize its importance,” Archbishop Flynn said. “I would feel deprived, because this is my vocation to preach the Gospel.
“And if I were celebrating Mass, and it came time for me to preach – which should be the fruit of my prayer, my experience and the experience of those who (are) in (the) congregation – it would be disruptive to me to have someone else come and break open the word of God,” he said.

Archbishop Flynn has received letters both from Catholics who support lay preaching and from those who are distressed by it, he said.

If a layperson must speak or preach at Mass, it would be appropriate for him or her to address the congregation after the prayer after Communion, he said.

For parishioners accustomed to hearing laypeople preach on the Gospel, and for the lay preachers themselves, understanding and accepting the change has been difficult.

Ruth Hunt, 52, a parishioner at St. Joseph in New Hope, has been preaching for 13 years. The number of lay preachers at her parish has fluctuated between five and about 12, she said. When she first heard that lay preaching would end in her parish, she said, she was filled with sadness and a sense of loss. The response of many St. Joseph parishioners was similar, she said.

Ms. Untiedt, 62, also has been preaching for 13 years at St. Joseph and was instrumental in bringing lay preaching to her parish.

After Mass May 4, a parishioner told her that he enjoys hearing lay preachers because he can identify with their life experiences, she said. .

Lay preachers at St. Frances Cabrini meet almost weekly throughout the year to read, pray and discuss Scripture together. In the last 15 years, the parish has had 52 lay preachers ranging in age from 30 to the mid-70s. They are provided with seven sources of written material to help them plan what to say, and many consult additional sources, said Chris Kosowski, the parish’s liturgist.

Some parishes have stopped lay preaching completely. Others were looking for new ways to use their lay preachers. At St. Joseph, lay preachers will reflect on the day’s Scriptures before Mass one Sunday per month. .

Archbishop Nienstedt said it is “not a question of a person’s God-given talent. There may be better speakers, but this priest or deacon, we believe, has been ordained … for this sacred service. There is the power of the Holy Spirit that goes with him that doesn’t go to just anyone who has been baptized.”

Archbishop Nienstedt said he hopes that people will be understanding of the church’s position, but realizes that it might not be easy for them.

“It’s awfully hard to explain to somebody why you can’t do something next Sunday that you already did last Sunday,” he said.

Contributing to this story was Joe Towalski.