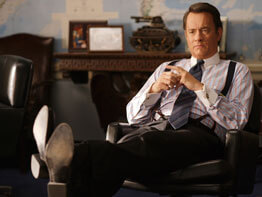 ROME – Rome diocesan officials have denied Hollywood producers permission to film the prequel to “The Da Vinci Code” inside its churches in Rome.

Producers of the film, “Angels and Demons,” were turned down because the movie is a work of “fantasy that damages common religious sentiment,” said Father Marco Fibbi, Rome diocesan press officer. “Normally we read the script, but this time that wasn’t necessary. The name Dan Brown was enough” to reject the request, he told the Italian daily Corriere della Sera June 16.

The new movie, directed by Ron Howard and starring Tom Hanks, is based on the Brown best-seller “Angels and Demons.” Another Brown novel, “The Da Vinci Code,” sparked criticism for offending the church and its beliefs.

Producers of the new movie, currently being filmed in Rome and due for release next spring, asked for permission to film scenes inside the churches of Santa Maria del Popolo and Santa Maria della Vittoria about a year ago.

Father Fibbi told the Italian paper that normally the diocese receives dozens of requests every year to film inside its churches.

“When it’s about the lives of the saints or the artistic history of the churches, we certainly give permission. Instead, if its content does not pertain to traditional religious criteria, then we keep the doors closed,” he said.

The Italian priest told the weekly Italian TV guide, TV Sorrisi e Canzoni, that the “Angels and Demons” movie project “did not even have the necessary elements to ask for permission.”