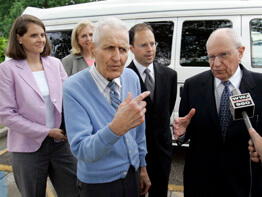 DETROIT – An official of the Detroit Archdiocese denounced the media “hype” surrounding the parole of Jack Kevorkian, saying the assisted suicide proponent was being “treated as a celebrity parolee instead of the convicted murder he is.”

His only comment was to describe the release as “a high point of life.” He was expected to hold a news conference June 5.

“For 10 years, Jack Kevorkian’s actions resembled those of a pathological serial killer,” said Ned McGrath, director of communications for the Detroit Archdiocese, in a May 31 statement. “It will be truly regrettable if he’s now treated as a celebrity parolee instead of the convicted murderer he is.”

The 79-year-old Kevorkian served eight years in prison after being convicted of second-degree murder and sentenced to 10 to 25 years. He had videotaped himself helping Thomas Youk, who had Lou Gehrig’s disease, to die, and the videotape was broadcast nationally on “60 Minutes,” a CBS television program.

Using a machine he called the “Mercitron,” he was believed to have been present for at least 130 deaths.

Under the terms of his parole, Kevorkian is banned from assisting in any suicides or advising anyone on how to make his suicide machine. He is permitted, however, to speak out in favor of the practice.

Mr. McGrath said that Catholics in Michigan and the Detroit Archdiocese pledged “to continue our efforts on behalf of patients, their families and their caregivers to increase the knowledge – and availability – of medically and morally sound options for end-of-life decision-making.”

Dorothy Deremo, president and CEO of Hospice of Michigan, expressed hope in a statement that Kevorkian’s release would be “an opportunity to shed light on the services available to people who are living with serious illnesses.”

As Kevorkian was about to be released, The Gallup Poll made public the results of its latest polling, which showed that Americans are divided on the issue of physician-assisted suicide.

Asked if physicians should be allowed to assist in a suicide if the patient who “has a disease that cannot be cured and is living in severe pain” requests it, 56 percent said yes and 38 percent said no. Asked whether doctor-assisted suicide is morally acceptable, 49 percent said it was and 44 said it was not.

Among those who attend church weekly, 47 percent said doctors “should be allowed by law to end the patient’s life by some painless means if the patient and his or her family request it,” but 51 percent said they should not be allowed to do so.

The results were based on telephone interviews with 1,003 U.S. adults May 10-13. The margin of error was plus or minus 3 percentage points.