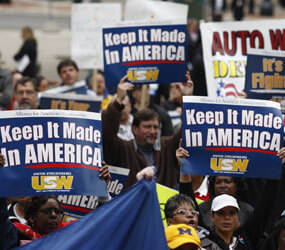 DETROIT – Archbishop Allen H. Vigneron of Detroit said he was praying for those affected by the General Motors Corp. bankruptcy.

“The news concerning General Motors adds to the disruption and uncertainty already faced by many of our fellow citizens,” Archbishop Vigneron said in a June 1 statement. “All of those impacted by these latest developments are in my prayers.”

GM, until recently the world’s largest automaker, filed for Chapter 11 bankruptcy protection June 1. Under the terms of the filing, the U.S. government, which has made billions of dollars in loan guarantees to GM since last year, will own 60 percent of the company.

The Canadian government, which has been assisting GM facilities in that country, will own 12 percent, and the UAW will own about 17 percent of the company, while bondholders will own most of the remainder.

But the bankruptcy filing also came with news that GM would close another 16 of its 49 remaining manufacturing and assembly plants.

GM announced earlier this spring that it would discontinue selling the Pontiac, Saturn and Hummer brands. Hummer is being sold to a Chinese industrial firm, and most of GM’s European brands have been shed, sold or shielded from bankruptcy.

“I invite the Catholic faithful to join with me as we implore the Blessed Virgin Mary, Mother of Perpetual Help, for her comfort in these times of economic distress,” Archbishop Vigneron said in his statement. “And we humbly ask for her intercession with Jesus, her son, to strengthen all of those bearing the burdens of the challenges before us.”

The GM bankruptcy came the same day after Chrysler, the United States’ third largest automaker, came out of bankruptcy. The Italian automaker Fiat will take most of Chrysler’s assets.

Michigan had the nation’s highest unemployment rate even before the Detroit automakers started reeling last year from the effects of record-high gas prices and weakening auto sales.

Consumer advocate Ralph Nader, whose book “Unsafe at Any Speed” exposed the flaws in the Chevrolet Corvair in the 1960s and was spied upon by GM in retaliation, criticized the bankruptcy plan in a June 2 statement.

“What about the act of closing dealers? Dealers don’t cost manufacturers anything. The franchise agreement makes certain of that. So why are we further inconveniencing motorists, rupturing their relationship over the years with dealers that are closer to home and making them travel more and more?” Nader said.

“The answer is, the fewer dealers, the more likely the price of cars goes up. So there are all kinds of reasons why this should go back to Congress for thorough House and Senate hearings, if Congress wanted to adhere to its constitutional duties,” he said.