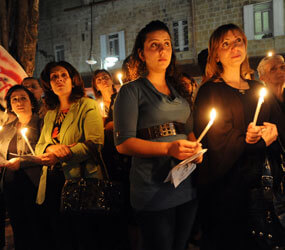 BEIRUT – Despite terrorist warnings that all Christians in the Middle East are “legitimate targets,” the faithful in the region say they have placed their trust in God.

An al-Qaida group in Iraq made the threat in an Internet statement in early November. The same group was responsible for the Oct. 31 siege in the Syrian Catholic cathedral in Baghdad that ended in a rescue drama that killed 58 people, including 46 Catholics who were in the church.

Barbara said attacks such as the one in Iraq and threats to Christians “make the people who are lukewarm in their faith to boil for Christ.”

While the Christian presence in Lebanon – about 33 percent of the population – has been steadily dwindling due to emigration, Barbara said she is determined to stay in the land of her birth.

“I am planted in this country,” she said, adding that she will encourage her three children to stay in Lebanon. “This is our mission, to be a witness to Christ here.”

John Fahed, a 26-year-old Maronite Catholic from Beirut, told Catholic News Service, “I am not afraid to be in Lebanon because I feel the Lord has called me to stay here, and he will protect me.”

“I didn’t expect it,” he said of the announced threat, “but I’m not really surprised. We are living in a place where everything is possible.”

Fahed said that, growing up in Beirut, he experienced the horrors of the 1975-1990 civil war.

“We had bombs and shells exploding in our house, yet God kept me and my family safe from danger,” he said. During the Israel-Hezbollah war in the summer of 2006, he continued with his daily routine, going to work every day.

“I pray daily. I’ve been brought up to do that,” he said. “God hears my prayers.”

As for his the terrorist group making the threats, he said: “I can’t respond to their hatred by hating them back. Instead, I pray for them that their eyes will be open to the truth. I think the best thing we can do is to pray for them, to love them.”

Jocelyn Cherfan, 45, a Maronite Catholic from Beirut, said, “Without Christians, Lebanon would not be Lebanon,” pointing out that the country would become like another Saudi Arabia without its Christian presence.

“We are all living together here – Muslims and Christians,” she said, noting that many Christians are married to Muslims.

Cherfan views the persecution of Christians in the region as a “wake-up call” for the faith.

“Masses are full, and even the new generation of younger people are coming back. We are becoming like the cedars of Lebanon,” she said. “With our feet planted on the ground, we have to be one hand, all together, and with our faith we have to face the problems all together.”

Christians in Jordan – representing only about 3 percent of the country’s population – are also expressing trust in the Lord.

“About the threats: Really, we are not afraid,” said Father Rif’at Bader, director of the Catholic Media Center in Jordan. “Not because the name of Jordan is not mentioned in these threats, but because we have a strong faith, and we are the followers of Jesus Christ who pardoned his crucifiers.”

Father Bader added that Christians in Jordan “are not, and never will be, at the margins of society.”

He said the October Synod of Bishops for the Middle East “gave us a renewed encouragement and strength to be always attached to our church and to our societies as well.”

In the West Bank, although Christians are a target for extremists, they are not afraid, said Father Faysal Hijazen, priest at Holy Family Parish in Ramallah.

“This is our land,” he said Nov. 5. “We Arab Christians and Muslims are living together here for centuries. We are not afraid of anybody. This is our land, our Middle East.”

“I have lived here all my life and I never was afraid,” he said. “Extremists can’t come here to the West Bank and Gaza. It is different here than in Iraq, the borders are so closed.”

As she guided her 10-year-old daughter, Carmen, into the church, Abir Kidess, 35, said she would never be intimidated from practicing her faith or leaving her homeland.

“I am proud of being Christian and I am willing to die for my faith if that is God’s plan,” she said.

She said she had spoken to her daughter about the attack and what had happened.

“I am afraid they will come to kill us like they did at the Iraqi church,” said Carmen, adding that only her faith in God made her feel safe.

Latin-rite Archbishop Jean Sleiman of Baghdad told the British branch of Aid to the Church in Need that he feared Iraq’s Christians would lose hope after the attack. He said Christians “are deeply afraid. But they are trying to overcome this latest horrible experience.”

“This is not possible for all of them, but it’s the only way to find inner peace and so to resist in a very hostile context,” he said.