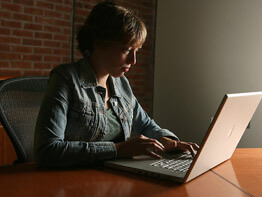 “Teresa thought she was acting safely on the Internet. Within 20 minutes, we found out her full name, age, her parents’ names, her street address, phone number, the time of day she and her parents were home, and high schools near where she lived.” – from Tracking Teresa, NetSmartz video for teens

If you think you’re up-to-date on the issue of Internet safety, think again, said Chris Weber, director of the archdiocese’s Catholic Education Ministries of Central Maryland housed at Mount St. Mary’s University, Emmitsburg.
Mr. Weber recently attended a training sponsored by the Office of the Attorney General where he “received a chilling update on the dangers of Internet use” he said and learned about a “fantastic” new resource to teach kids of all ages about Internet safety.
Results of a 2006 survey posted on the National Center for Missing & Exploited Children’s Web site reveal that 45 percent of the nation’s 30 million children younger than 18 use the Internet.
One in seven children has received an unwanted sexual solicitation from a stranger in a chat room or from someone they knew.
“These kids really are exposed to this,” remarked Mr. Weber, who warns parents to “learn about the issue and read the stats.”
“Sign in – everyone can join” is the hook on facebook.com’s log-in page. With this “social utility” and myspace.com as prevalent as pimples in teens’ and tweens’ lives, it becomes imperative that parents stay keenly alert of what their kids are doing online, monitoring how they are acting and knowing what content and photos they are posting on such sites.
During the training, Mr. Weber learned about situations such as a teenager revealing a password to a friend.
“Next thing you know,” he said, “it got into the wrong hands, and someone sent out a pornographic photo with that teen’s head on another body.”
He listened to the chilling story of a 15-year-old girl who had corresponded online with a 55-year-old man for two years before she ran away with him – twice. She believed he loved her. He eventually assaulted the girl.
“Relationships are everything to kids,” commented Mr. Weber, 45, who supports catechesis leaders and youth ministers in Catholic schools and parishes. “They connect better to their peers. They think the strangers online are peers.”
“Grooming” is one typical online behavior of a predator.
“These guys and ladies patiently will spend as long as it takes to build trust,” said Mr. Weber. Then in the eyes of the youth, it doesn’t matter if they are a peer or not. Maybe then it’s too late.
Yet it’s not too late for parents and kids to educate themselves further about Internet safety. Mr. Weber learned of The NetSmartz Workshop, a project of the National Center for Missing & Exploited Children.
Targeted to parents and guardians, educators, law enforcement, teens and kids who want to understand more about the Internet and its potential dangers, visitors can access www.NetSmartz.org at no cost and peruse its innovative tools such as animated videos, safety pledges, and classroom activities.
“They really teach kids some important caveats for being online and using these social network spaces,” said Mr. Weber, the father of a 7-year-old boy and 10-year-old girl. “One of the wakeup calls for me personally as a parent is I have to be really on top of what my children are doing online.” He showed his children the “fun, cute” link for kids.
“It’s what they’re used to,” he said, “but it’s a teaching tool. They got the point.”
Another link exists specifically for teenagers, revealing true stories he said would catch their attention.
“They’re not going away,” said Mr. Weber about the internet’s social sites. “This has become a way for people to interact.”

To learn more about the NetSmartz.org resources, contact Chris Weber at 301-447-3707.
A free train the trainer program will be offered Sept. 26, 2-4 pm, at the Montgomery County Council Hearing Room, Rockville. Visit www.oag.state.md.us/clicks.htm.