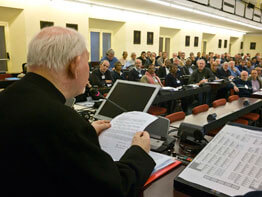 ROME – Delegates to the General Congregation of the Society of Jesus voted Jan. 14 to accept the resignation of Father Peter-Hans Kolvenbach as superior general.

When the result of the vote was announced, Father Kolvenbach received a standing ovation and thanked the delegates “for so graciously firing me.”

Before the vote, Father Kolvenbach told the more than 200 delegates that he was offering his resignation because “the Society of Jesus has the right to be governed and animated by a Jesuit in full possession of his physical and spiritual talents and not by a companion whose energies continue to diminish because of age.”

After the delegates accepted his resignation, Father Kolvenbach offered his thanks to God, to Pope Benedict XVI and to the Jesuits.

He told them, “With gratitude toward the Lord we recognize that, despite a baffling diversity of persons and cultures, aspirations and works, there was never a lack of unity of spirits and hearts” among the Jesuits.

Father Kolvenbach also said that, “despite a growing fragility,” the Jesuits still are able to dialogue with the modern world in a way that enables them to proclaim the good news.

The vote on Father Kolvenbach’s resignation came after one week of meetings, during which the delegates discussed the status of the more than 19,000 Jesuits and the challenges they face.

Father Kolvenbach informed the Jesuits in 2006 that he intended to present his resignation and convoked the General Congregation for 2008, the year he would celebrate his 25th anniversary as superior general and his 80th birthday.

Father Kolvenbach was born Nov. 30, 1928, in the Netherlands. He entered the Jesuit novitiate just before his 20th birthday and was ordained a priest in 1961. A linguist and expert in Eastern Christian rites, he taught and ministered in Lebanon before being named rector of Rome’s Pontifical Oriental Institute in 1981.

Including the Jesuit founder, St. Ignatius of Loyola, Father Kolvenbach was the order’s 29th superior general and only the second to resign. The first was his immediate predecessor, Father Pedro Arrupe, who suffered a stroke.

The delegates will concelebrate a Mass of the Holy Spirit early Jan. 19, then will proceed to vote. When a Jesuit garners a simple majority of the votes, he is elected superior general.

Pope Benedict will be informed of the results of the election before the name of the new superior general is made public.