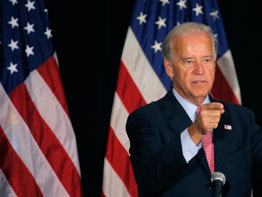 WASHINGTON – There is little record of public discourse between vice-presidential candidate Sen. Joe Biden and the bishops of his home diocese in Delaware over the Democratic senator’s legislative position on abortion.

Biden, a Catholic, was named Aug. 23 as the running mate of Sen. Barack Obama of Illinois.

Putting Biden on the Democratic ticket ensured the resurgence of many of the same questions and accusations that plagued Sen. John Kerry of Massachusetts four years ago about a Catholic nominee whose voting record on abortion sometimes conflicts with Catholic teaching.

During the campaign in 2004, a handful of Catholic bishops – not including the heads of the dioceses where Kerry regularly attends Mass in Washington and Boston – issued statements saying they would refuse to give the senator Communion if he presented himself to them during Mass.

Like Kerry’s record, Biden’s legislative history includes opposition to efforts to pass a constitutional amendment prohibiting abortion and to make it harder for minors to cross state lines to obtain an abortion.

On other issues, however, Biden has voted in favor of limits on abortion, including voting for a ban on partial-birth abortion and against federal funding for abortions. He has said he accepts the church teaching that life begins at conception.

Until his nomination was announced, Biden’s relationship with the Catholic Church over such issues had only rarely made news.

Bishop Mulvee, who moved to Providence, R.I., in 1995 and has since retired, said at the time that he was “personally convinced that communication, not excommunication, is the way to change minds and hearts” on abortion.

Bishop Mulvee said his conviction on the subject applied to elected or appointed public figures as well as to those out of the public eye.

In 2006, Biden’s high school alma mater, Archmere Academy, a Catholic prep school in Claymont, Del., dropped plans to name a new student center for Biden. Three of Biden’s children also graduated from Archmere and the senator has remained active in a variety of activities there, from serving as co-chairman of a fundraising committee to helping other parents decorate for the school prom.

The school cited a request from Wilmington Bishop Michael A. Saltarelli, who said naming the building for Biden would conflict with a 2004 statement by the U.S. bishops about Catholics in political life. It says “Catholic institutions should not honor those who act in defiance of our fundamental moral principles.”

In 2005, Bishop Saltarelli issued a statement giving local context to “Catholics in Political Life,” the statement of the U.S. Conference of Catholic Bishops.

It said he was personally committed to “a principled and respectful dialogue and engagement with all public officials.” He also encouraged all Catholics to engage in such dialogues with people in public office, and to pray for them.

Bishop Saltarelli said diocesan Catholic institutions would not “honor Catholic politicians who take pro-abortion legislative positions or invite them to speak at our functions or schools.”

He concluded by writing that “it is not my expectation that individual priests, deacons and extraordinary ministers of Communion will make judgments on their own as to the worthiness of individual Catholic public servants to receive Communion. That is ultimately my responsibility in light of Catholic moral theology and the Code of Canon Law. At this stage, I much prefer the active engagement and dialogue called for by ‘Catholics in (Political) Life.’”

Bishop W. Francis Malooly, an auxiliary bishop in Baltimore since 2001, is to be installed as the new bishop of Wilmington Sept. 8, succeeding the retiring Bishop Saltarelli.

Bishop Malooly apparently has made no public statements that might predict his pastoral approach to Biden.

Kerry’s nomination in 2004 marked the end of a 20-year hiatus when there was no Catholic in either of the top slots for the Democrats. Kerry was the first Catholic to head the ticket since John Kennedy in 1960.

There have been four Catholic Democrats who have run for vice president since 1960: Edmund Muskie in 1968, Thomas Eagleton and then Sargent Shriver in 1972, and Geraldine Ferraro in 1984.