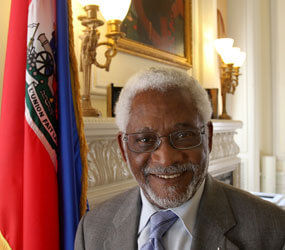 WASHINGTON – Road construction and other infrastructure improvements are beginning outside of the Haitian capital of Port-au-Prince in a wide-ranging effort to rebuild parts of the country devastated by the Jan. 12 earthquake.

Haiti’s ambassador to the United States, Raymond Joseph, said the work in outlying areas is vital to the government’s plan to decentralize services and to make it easier for people to move from the distressed capital to rural communities and small towns targeted for future development.

In a June 2 interview with Catholic News Service, Joseph also complimented the initial response of aid agencies, including the Catholic Church’s Caritas Haiti, but urged nongovernmental organizations to speed up the delivery of aid in the quake zone to ease a growing concern among victims that they are being overlooked now that the world’s attention has turned to other problems.

In addition, Joseph urged the world’s nations to begin to pay toward their pledges of support for Haiti’s rebuilding, as promised during the March 31 U.N.-sponsored conference of donor nations, and for the World Bank to finalize membership of the oversight commission charged with dispersing aid through the Haiti Reconstruction Fund set up for the pledges.

In March, donor nations pledged $5.3 billion through 2011 and a total of $9.9 billion through 2014 for Haiti’s rebuilding. Only Brazil has begun payments toward its pledge with a $55 million contribution May 11, according to the World Bank.

“At that point, I took the opportunity to remind the international community, those who have pledged, that it’s time to pony up,” he added.

The World Bank subsequently announced that confirmations of intent to contribute have come from Canada, Estonia, Norway, Sweden, Saudi Arabia and the United States. The World Bank also said that at least 14 other countries are expected to chip in to replenish the fund that opened in April with an initial grant of $189 million for recovery efforts.

Overall, recovery and rebuilding remains steady, but slow, Joseph explained. But he cautioned that it will be private investors, not world governments, who will develop Haiti.

“The government is there to prepare the infrastructure and provide security,” he said.

Seventeen of 18 government ministries were destroyed during the 47-second quake. In the five months since the disaster, Joseph acknowledged that “ministers are not working in tip-top shape, but … things are going on.”

“So the lesson is right there for us to learn that we should not have all our eggs in one basket,” he said.

“So where do we stand? The prime minister of Haiti (Jean-Max Bellerive) said we’ve gone from generalized chaos to controlled chaos. Right now I think we are passing the stage of controlled chaos to a debut of development in that some work has started,” he said.

But first, Joseph said, the country must set priorities.

“Everything is a priority in Haiti,” he told CNS. “We have so many choices we are faced with a dilemma.”

The emphasis on decentralization is also aimed at moving a large segment of the capital’s 2.5 million to 3 million people out of Port-au-Prince, a city originally built for 300,000 people.

Housing is a vital need as well, Joseph said, especially because about 1 million people were left homeless by the temblor. The ambassador estimated that 200,000 to 300,000 people remain in hundreds of makeshift tent camps in and around the capital.

Many people have returned to their neighborhoods after inspections found their homes safe, but often return to the camps when word of an aid distribution spreads, Joseph said.

A CRS staff member told CNS that he found some people do return to the camps when they hear that food distribution is expected, but that the number of people doing so is minimal. He said the vast majority of people remaining in the camps are homeless.

Joseph said the government is sorting through numerous offers of housing assistance. The goal is to construct new homes and apartment buildings according to Western building codes, he said.

Recent demonstrations in the capital have called upon the government to act more quickly in addressing housing needs, especially because the Atlantic hurricane season has begun. The normal rainy season of April and May was less severe than usual, but camp-dwellers living under tarps and plastic sheeting know one hurricane or tropical storm can be deadly.

However, Joseph dismissed the protests, telling CNS they appeared to be “some political manipulation because they want to make the government look bad.”

“The (homeless) people for whom they are supposedly demonstrating are not joining in,” he said.