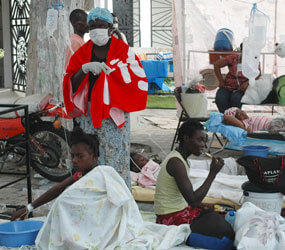 WASHINGTON – Even as the death rate slowed in central Haiti a week after the first cases of cholera were reported, a multinational medical response boosted efforts to limit the spread of the disease in the poverty-stricken country.

The World Health Organization reported 259 people had died as of Oct. 26. Overall, 3,342 cases of the disease had been reported.

The outbreak was confined largely to Artibonite department, although cases also were reported in the Central department to the east as well as in the capital of Port-au-Prince and Haiti’s second city, Cap-Haitien in the north. The cases were discovered among people who had traveled from those areas since the outbreak began Oct. 19.

Teams from various agencies, including the Pan American Health Organization and the Centers for Disease Control and Prevention in Atlanta continued monitoring water and food samples in Port-au-Prince in an effort to prevent a massive outbreak of the disease.

The capital and the surrounding area are considered extremely vulnerable because an estimated 1.3 million people remain in makeshift tent camps nine months after a devastating earthquake destroyed much of the city. Camp residents have limited access to clean water and sanitation.

Aid workers hustled to stop the outbreak from spreading from communities in southern Artibonite to other parts of the country.

Water, hygiene kits and antibiotics continued to be trucked into the affected area by aid agencies. Daniel Rouzier of Food for the Poor told Catholic News Service from Port-au-Prince that his agency sent 10 solar-powered water filtration systems into the area Oct. 22-23.

Information about the disease’s symptoms and prevention tips were passed on to people by the various agencies working in the country, including Catholic Relief Services.

Prevention efforts were stepped up in the tent camps in the earthquake-battered capital and surrounding communities, about two hours south of where the outbreak erupted.

Robyn Fieser, regional information office for CRS, told CNS Oct. 26 that agency staff and partners had fanned out across 12 camps and distributed soap and cholera prevention brochures to more than 10,000 families.

Cholera is a water-borne bacterial disease that causes severe vomiting and diarrhea. Left untreated, it can kill a person within hours of the onset of symptoms because of dehydration. The disease can be treated with fluids and antibiotics. People who receive treatment quickly usually survive.

Pan American Health Organization Deputy Director Jon Andrus told a news briefing in Washington Oct. 25 that the outbreak is the first in Haiti in 50 years. Even the 1991 outbreak, which affected almost every country in the Western Hemisphere, missed Haiti, he said.

“Now that cholera has established itself with a strong foothold in Haiti, this will not go away for several years,” he said, explaining that the disease likely will reappear in cycles.

Deacon Rodrigue Mortel, director of the Missions Office for the Archdiocese of Baltimore who runs a mission program in his hometown of St. Marc, Haiti, told CNS Oct. 22 that St. Nicolas Hospital there was filled to capacity with patients exhibiting cholera symptoms.

He said the disease appeared to be spreading.

“There are many outbreaks in many places that were not affected as of yesterday,” Deacon Mortel said Oct. 22. “There are other places where this has been found.

“They don’t know (how it started),” he added. “We know where it started but not what triggered it.”

Deacon Mortel’s sister lives in St. Marc, and he said she described how prevention efforts have taken priority at Good Samaritan School, where 600 students are enrolled.

Rouzier said that on Oct. 19, his agency began receiving concerned calls from priests and pastors in Artibonite who reported that dozens of ill people were seeking assistance. He said water sources in the region were often shared by humans and animals.

About 1 million people live in the plateau area affected by the outbreak.