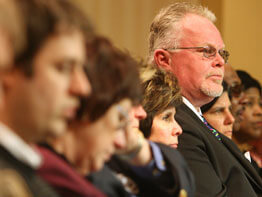 ANNAPOLIS – Armed with a new study that shows the death penalty has cost taxpayers at least $186 million, opponents of capital punishment urged a Senate committee to ban the death penalty in Maryland or at least commission a study to look at the issue.

Family members of murder victims also testified at the March 6 judiciary committee hearing, outlining how the death penalty has exacted a painful toll on their lives.

John Roman, senior research associate at the Urban Institute in Washington, D.C., and author of the study commissioned by the Abell Foundation, told lawmakers it costs the state about $3 million to seek and obtain a death penalty sentence. That is about $1.9 million more than the costs of a murder case in which no death penalty is sought. The study examined 162 murders between 1978 and 1999 that became death penalty prosecutions.

Sen. Lisa Gladden, a Baltimore Democrat and chief sponsor of a repeal of the death penalty, said $186 million could be put to much better uses.

“What could we purchase with that?” she asked. “We could cover all the uninsured. We could provide tuition assistance or drug treatment two or three times over.”

When Sen. Bryan W. Simonaire, an Anne Arundel County Republican, asked Sen. Gladden what dollar amount was too much to spend on death penalty cases, the senator paused and replied, “There’s no dollar amount on a person’s life. For me, any amount is too much.”

Loved ones of family members who have been murdered said the money spent on death penalty cases would be better used to provide counseling and other support to survivors.

Kathy Garcia, whose nephew was murdered 20 years ago in New Jersey, said she philosophically favors the death penalty but believes it devastates families. Ms. Garcia was a member of a New Jersey commission that advised that state to abolish capital punishment.

“I’ve watched too many families go through this to make me believe the system will ever work,” she said. “The death penalty divides families at the very time they need each other the most.”

While some death penalty proponents suggest that the death penalty brings a sense of closure, “there is no such thing as closure,” according to Ms. Garcia.

“My real life experience has taught me as long as the death penalty is still on the books, it would continue to harm families,” she said.

Vicki Schieber, who daughter was murdered in Philadelphia in 1998, told the committee that years of death penalty appeals are excruciating to families.

“The system is just too painful,” she said.

Sen. Alex X. Mooney, a Frederick County Republican, read a letter from a member of a family whose loved one was recently murder. The letter suggested that the death penalty would be a just punishment. He asked why the position against the death penalty voiced by families at the hearing should apply to people like the letter writer.

Ms. Garcia responded that immediately after a murder, some families seek the death penalty.

“Repeal rests in your hands – perhaps in one hand,” Sen. Gladden told the committee members, in an apparent reference to Sen. Mooney.

Richard J. Dowling, executive director of the Maryland Catholic Conference, pointed out that Maryland was among the very first states to outlaw the execution of juveniles and those with mental retardation. The state now has the opportunity to be among the first to replace the death penalty with life without parole sentences, he said.

Kirk Bloodsworth, a former death row inmate who was exonerated for a murder he didn’t commit, said he won’t rest until the death penalty is abandoned. Wearing a tie with a DNA helix on it – referring to the DNA testing that proved his innocence, Mr. Bloodsworth pointed out that more than 127 people have been exonerated from death row.

“I don’t want another Marylander to suffer the same fate I almost did,” he said.

Sen. Jamie Raskin, a Montgomery County Democrat, urged the committee to establish a commission to study the death penalty. It would include representatives from both sides of the issue, he said.