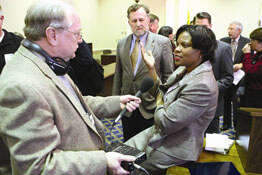 ANNAPOLIS – After many years of failed attempts to repeal the death penalty in Maryland, abolitionists are closer than ever to passing a ban on capital punishment now that Gov. Martin J. O’Malley has promised to sign repeal legislation.

The governor made the pledge Jan. 25 after Sen. Lisa Gladden and Del. Sandy Rosenberg, Baltimore City Democrats, unveiled legislation that would replace Maryland’s death penalty with a prison sentence of life without parole.

In a written statement to The Catholic Review, Gov. O’Malley said the death penalty “has proven to be a poor deterrent to violent crime.”

“I hope that we can invest our limited resources in programs and policies that save lives and take our most dangerous offenders out of our communities,” he said.

Not only will the governor sign the bill, he will lobby for its passage, according to Rick Abbruzzese, a spokesperson for the governor.

Even with the governor’s support, the legislation faces significant hurdles. Sen. Gladden said she still needs one more vote to get the bill out of the Senate Judicial Proceedings Committee. If the bill makes it to the Senate and House floors, it needs 24 votes to pass the Senate and 71 votes in the House.

“We’re not there yet,” said Sen. Gladden, “but it’s not totally out of the question that we could pass it this year.”

Noting that innocent people have been sentenced to death in Maryland and across the country, Sen. Gladden said she is sure lawmakers “don’t want blood on their hands.”

Kirk Bloodsworth, an Eastern Shore native who was wrongly sentenced to death for the rape and murder of a 9-year-old girl before DNA evidence proved his innocence, said he is “living proof” that the criminal justice system makes “serious mistakes.”

Vicki Schieber, whose daughter was raped and murdered in Philadelphia, agreed with Del. Rosenberg who called the death penalty “broken beyond repair.” Years of appeals only delay healing and prolong the pain of murder victim’s families, she said.

“It diverts resources and attention from the things that would really help victims’ families in the aftermath of murder,” said Mrs. Schieber, a Catholic of the Archdiocese of Washington.

“It doesn’t create the kind of society that I want to live in, one in which human life and human rights are valued,” she said.

Del. Rosenberg asserted that sentences of life without parole would act as “enormous deterrents” to murder. He questioned the amount of money Maryland spends on death penalty cases – about $2 million a year in defense costs alone to litigate a capital case, according to Maryland Citizens Against State Executions.

“The time and effort litigating these cases … could be spent on preventative measures that make each and every citizen more safe in their home,” Del. Rosenberg said.

“Our Catholic teaching instructs us that if non-lethal means are sufficient to defend and protect people’s safety, then government should limit itself to such means,” he said.

Mr. Dowling of the Maryland Catholic Conference said the church’s position goes beyond legalistic arguments and looks directly at the sanctity of human life.

“We should not resort to killing, not even in the case of one who takes the life of another and, by doing so, denies not only his and his victim’s human dignity, but God’s dominion as well,” he said.

Mr. Dowling said most Marylanders are ready for repeal. He cited a poll conducted two years ago by Mason-Dixon Polling & Research that found that nearly two-thirds of all voting-age Marylanders viewed life without parole as an acceptable alternative to the death penalty.

A 2003 University of Maryland study found racial and geographic discrimination in the way the death sentence is applied in the state, and Maryland’s Court of Appeals issued a moratorium on capital punish¬ment Dec. 19, saying the state had improperly followed protocol for lethal injections.

Citing the costs of revising execution protocols, Jane Henderson of Maryland Citizens Against State Executions, said the death penalty should be abandoned.

“Lethal injections are on hold in Maryland, California, Florida and seven other states,” she said, noting that complications surrounding lethal injection are likely to continue for years.

“The legislature should avoid this legal quagmire and save millions of the taxpayers’ dollars by moving now to replace the death penalty with life without parole,” she said.

Since 1978, each of the 56 people sentenced to death in Maryland has had his sentence reversed at some point during the appeals process, according to Maryland Citizens Against State Executions.
Eleven of those sentences were reinstated, with five people executed and six remaining on death row.