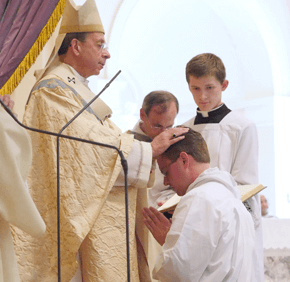 Fellow clergy, friends and his substantial family gathered at the Basilica of the National Shrine of the Assumption of the Blessed Virgin Mary in Baltimore May 30, for a Mass celebrating the transitional diaconate of Michael Rubeling.

Archbishop William E. Lori presided over the last step prior to the priestly ordination of Deacon Rubeling, who is expected to become a priest for the Archdiocese of Baltimore in June 2016.

A parishioner of St. Peter the Apostle in Libertytown, Deacon Rubeling is one of 10 children. His brothers include Peter, a college seminarian at John Paul II Seminary in Washington, D.C.

In addition to his family, those at the Baltimore Basilica included Cardinal Edwin F. O’Brien, archbishop emeritus of Baltimore, who a day earlier had celebrated the 50th anniversary of his priestly ordination.

During the liturgy, Deacon Rubeling placed his hands in those of Archbishop Lori, promising respect and obedience to the archbishop and his successors.

In an expression of his total dependence on God, he prostrated himself on the floor as the faithful chanted the Litany of the Saints. After the archbishop laid hands on the new deacon, Deacon Rubeling was vested with the stole and dalmatic – signs of his new office. The archbishop also gave him a Book of the Gospels.

A deacon’s regular duties include proclaiming the Gospel at Mass and delivering homilies. In addition, he administers the sacrament of baptism and witnesses weddings. A deacon may also preside at rites of Christian burial, at eucharistic exposition and benediction, the celebration of the Liturgy of the Hours and other liturgical rites.

Transitional deacons differ from permanent deacons in that they are eventually ordained to the priesthood.

From sons to Fathers: A mother’s perspective on vocations

All in the family: Seminarians include pair of brothers