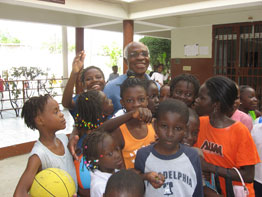 As the children he has extended a helping hand to grow, so does the vision of Deacon Rodrigue Mortel, M.D.

Deacon Mortel, the director of the Missions Office in the Archdiocese of Baltimore, has already forged bonds between more than a dozen local parishes and their counterparts in an impoverished Caribbean nation through the Baltimore-Haiti Outreach Project.

Now, to supplement a grade school in the coastal city of St. Marc that the Mortel Family Foundation built, Deacon Mortel is leading an effort to build a secondary school nearby that is scheduled to open in September 2010.

The project, to be named the James M. Stine College, has received a pledge of $1 million from the Philadelphia-based James M. and Margaret V. Stine Foundation. The preliminary cost of the school is $1.5 million, and making up that difference is the goal of the 2008 Gala of Hope, Nov. 8 at Marriott Hunt Valley Inn.

The annual fundraiser, which was sold out in 2007, shines a light on the Diocese of Gonaives, where the Baltimore-Haiti Outreach Project helps “the poorest of the poor.”

Deacon Mortel said that all proceeds from this year’s gala will go toward the construction of the new secondary school.

“The gala started with the idea of feeding the children from parishes that don’t have a sister parish in Baltimore,” Deacon Mortel said. “This year’s is designed to show the number of children who have reached secondary school age, and the need there. We have to provide the next level of education for these children.”

The secondary school will provide for the children being taught at

Its first students are starting seventh grade, and in two years they will move into the James M. Stine College, which will house grades 7-13. Its blueprints include three floors, 20 classrooms, lab space and a library.

“The education available through (public) schools is substandard,” Deacon Mortel said, “and this will be the only Catholic secondary school in St. Marc. The children are poor, but intellectually capable, and we have to serve them.”

Deacon Mortel said that a religious community of priests and Christian Brothers headquartered in Montreal will administer the school. A retired obstetrician and gynecologist, Deacon Mortel furthered his medical studies in that Canadian city after leaving his home in Haiti.

Deacon Mortel regularly arranges for parishes and individuals (see accompanying article) from the archdiocese to witness first-hand and help solve the poverty in Haiti.

“Thanks to the partnerships we’ve created with parishes in the Archdiocese of Baltimore,” Deacon Mortel said, “about 15,000 children are being fed every day.”