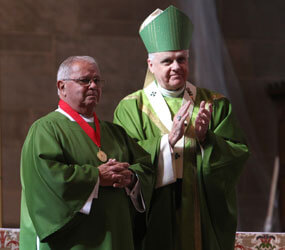 As he stood with a medal hanging from his neck, Deacon Richard W. Montalto could only smile as the packed church rained applause upon him.

Deacon Monti, as he is widely known, was awarded the Culture of Life Medal of Honor during the Respect Life Mass Oct. 24 at the Cathedral of Mary Our Queen in Homeland.

A deacon at St. Thomas Aquinas in Hampden, he was recognized for his contributions to the pro-life movement. As thrilled as he was to receive the award, Deacon Montalto said he considered it more of a recognition of the people he works with.

“I don’t take it as a personal award,” Deacon Montalto said. “I take it on behalf of all the men and women who volunteer, specifically at the Greater Baltimore Center for Pregnancy Concerns. When I go to the altar as a deacon, I bring that ministry with me.”

Linda Brenegan, director of the Archdiocese of Baltimore’s Respect Life Program, said that the award, in its 11th year, is an acknowledgment of hard work in promoting the pro-life position.

“We give the award to thank the people who have been so active in the pro-life movement,” she said, “and who have given so unselfishly of their time.” Catholic schools, including Mount de Sales Academy, Mt. Saint Joseph High School and Notre Dame Preparatory School, were represented at the Mass, evidence that the pro-life movement is getting younger, according to Brenegan.

She cited the church’s support as essential in the pro-life movement.

“The church’s role is vitally important in helping to form consciences and opinion in the right way,” she said. “We’re almost the only voice proclaiming the sanctity of human life.”

Archbishop Edwin F. O’Brien celebrated Mass, expressing his gratitude to those who support the pro-life movement.

“As we come to the end of the pro-life month of October, we renew our intentions and our energies to continue to stand up for life, God’s most precious gift,” Archbishop O’Brien said in his homily. “Thank you, each of you and all of you, who are making the sacrifices you are making to proclaim, yet again, that human life is that gift – inalienable – endowed by our Creator.”

“The archbishop’s message hit the nail right on the head,” Maria Zermeno said. “We felt for once, no one danced around the issues. Someone simply explained why we respect life.”

Archbishop O’Brien criticized society’s seemingly cavalier attitude toward the sanctity of human life, saying that human life is essentially viewed as a “commodity” by scientists who look to manufacture it.

“Every life is a gift of God,” he said. “Even as an increasingly secular culture banishes God and thinks itself autonomous, creating its own rules regarding the design of God from the very beginning.”

The Respect Life Office will sponsor a Helpers of God’s Precious Infants Mass at the Shrine of St. Alphonsus in Baltimore Oct. 30, at 8:30 a.m., to be followed by a prayerful procession to a Planned Parenthood clinic.