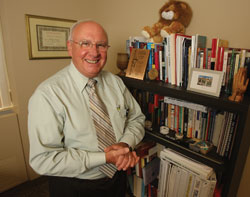 When Bishop Malooly leaves Baltimore to become the bishop of the Diocese of Wilmington, Del., Sept. 8, Deacon Hiebler will take on the added responsibility of being Archbishop Edwin F. O’Brien’s delegate for the western vicariate, a newly created post.

In his new role, Deacon Hiebler will assume many of the western vicar duties previously held by Bishop Malooly. He will work closely with the vicars forane, pastors and parish leaders in more than 40 parishes and missions in Allegany, Carroll, Frederick, Garrett, Howard and Washington counties.

“I’ll be the liaison between the archbishop and the western vicariate,” said Deacon Hiebler, 64, who will also continue ministering at the Cathedral of Mary Our Queen, Homeland.

Deacon Hiebler expects to visit many parishes in the west and help them plan for the future.

“I’ll be visiting the parishes not so much to evaluate them as to affirm what the parishes are doing,” said Deacon Hiebler.

While Carroll, Frederick and Howard counties are experiencing significant increases in population, areas further west in Allegany and Garrett counties are suffering population declines because of a lack of jobs, Deacon Hiebler said.

Four parishes in the Cumberland area – Ss. Peter and Paul, St. Patrick, St. Mary and St. Ambrose – have created a strategic planning taskforce to look at their current and future needs in light of changing demographics.

“They’re looking at liturgical life, facilities, personnel, programs and finances,” said Deacon Hiebler, noting that he expects other areas of the vicariate to launch similar taskforces in the future.

“In order for parishes to continue to survive, sharing personnel and programs will be very important,” said Deacon Hiebler, noting that it will be particularly critical for smaller faith communities.

“It’s already happening in the western region of the vicariate, and it may have to expand into other regions as well,” he said.

Deacon Hiebler said he is “looking forward to serving the parishes.” He considers it a special grace that he begins his new duties on the 24th anniversary of his ordination to the diaconate.

Before working for the archdiocese, Deacon Hiebler worked for 20 years with the Boy Scouts of America in a variety of executive positions. He is a former director of religious education at Immaculate Heart of Mary, Baynesville, and Our Lady of Grace, Parkton.

In a July 30 e-mail to Catholic Center staff and priests of the archdiocese, Bishop Malooly said the six counties of the western vicariate “have been well served by Charlie.”

“I am sure everyone in the west will be delighted with the archbishop’s choice,” Bishop Malooly said.