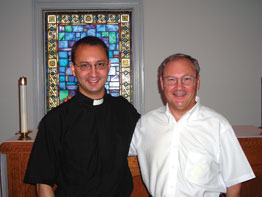 For 31 years, John Rapisarda has referred to Deacon Gregory Rapisarda as “Dad.”

In the not-too-distant future though, he won’t be the only one calling the St. Margaret deacon “Father.”

On Aug. 21, Deacon Rapisarda, a 61-year-old widower and father of four, will begin a two-year priest formation program at St. Mary’s Seminary and University in Roland Park.

Ironically, if Deacon Rapisarda has any questions along the way, he can always turn to his son, John, who was ordained a priest for the Archdiocese of Baltimore in June.

Deacon Rapisarda said his call to the priesthood was neither planned nor a goal.

It was some six months after the death of his wife, Carol, who died in January 2006 after battling cancer, that the St. Margaret deacon and attorney was first asked if he had considered the priesthood.

“I think it’s natural for any widow or widower to ask the question, ‘what now?’ after the death of a spouse,” said Father Rapisarda. “When dad did that, this is the answer he got.”

As a parent, Deacon Gregory Rapisarda was a prayer.

“I remember that I decided that in addition to my daily prayers for them, I would devote an hour a week to prayer for my wife and each child,” said the deacon. “And that’s what I did. I focused on that. I think that made a difference in our lives.”

In addition to his son being ordained a priest, Deacon Rapisarda’s daughter Joanna is studying theology, and his son Greg Rapisarda and daughter Gina Fritz have a vocation to married life.

Growing up, Father Rapisarda said his dad, who graduated from the University of Baltimore School of Law and began practicing law in 1972, was a busy man who put family first.

“Mom once described him as, ‘the most generous man’ she knew, ‘with the energy of the universe,’” Father Rapisarda said.

“Dad has proven his mettle as a husband and father,” said Father Rapisarda. “He poured himself out in sacrifice for Mom, for us. So in that sense, in that way, I can see this is natural. He knows how to be a husband; he knows how to be a father. Now he can give himself as a spouse to the church and a spiritual father for the church.”

Deacon Rapisarda cites his family, priests and deacons and the people in the parishes as sources of inspiration.

“I would have to say that my decision (to become a priest) is really the fruit of the spirit I see in other people,” explained the mild-mannered deacon.

He credits God with allowing him “a grace to respond to change” in his life.

“If I was resistant to change, I don’t think I would’ve recognized this opportunity,” he said. “When situations happen in our life, God always opens up other opportunities to give us hope, and in my case, it was the priesthood.”

While father and son have a good relationship on many levels, Deacon Rapisarda’s ordination to the priesthood will bring them closer.

“I think the Eucharist is something that will uniquely unite us – just the depth of the Eucharist,” said Deacon Rapisarda.

In the past decade, Deacon Rapisarda has focused on elder care law.

“My work as a lawyer has taken on a ministry, and in many respects, that ministry will continue,” said the St. Margaret parishioner of 31 years.

Deacon Rapisarda, who is winding down his law practice and selling his two-bedroom condominium and downsizing to 9-by-12 room at the seminary, realizes this decision will involve sacrifice.

“I would say that God has a sense of humor, and God never gives up on us,” he said. “And I can honestly say God always exceeds our expectations because this wasn’t within my expectations.”