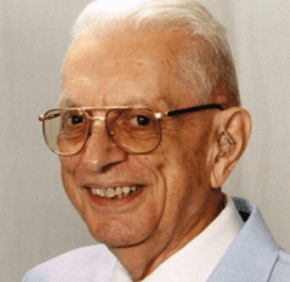 By George P. Matysek Jr
gmatysek@CatholicReview.org
Twitter: @ReviewMatysek
Deacon LeRoy W. Beimel Sr., 88, whose decades of ministry at Holy Trinity in Glen Burnie were marked by a deep concern for the sick and shut-ins, died Nov. 26 after a long battle with cancer. A funeral Mass was offered Dec. 5 at Holy Trinity, the same church where he was ordained to the permanent diaconate in 1981.
“He was very involved with prayer groups and any kind of service project where there was something to be done for the poor,” said Father Eugene Nickol, associate pastor of St. John in Columbia, who worked closely with Deacon Beimel from 1993 to 2003, when Father Nichol was pastor of Holy Trinity.
“There was no task too small or too big for him,” said Father Nickol, who delivered the homily at his friend’s funeral Mass. “He had a long history of cancer, and he never let it interfere with his ministry. He kept a very positive attitude.”
Queen E. Beimel, Deacon Beimel’s wife of 62 years, remembered how her husband prayed many years ago for a way to be of greater service to those suffering with cancer. He had often encountered cancer patients while ministering at Church Hospital in Baltimore. A week after offering that prayer, Queen Beimel said, Deacon Beimel was diagnosed with cancer.
“He asked God to show him how to take care of them,” Queen Beimel said. “He wanted to help people. He really enjoyed visiting the people and would do whatever he could for them.”
Deacon Beimel’s wife said her husband was inspired to become a deacon after having a near-death experience while in the U.S. Army, during which he broke his back. Deacon Beimel was an army criminal investigator during the Second World War, serving in the military for 21 years. He later worked as a salesman for Pinkerton Security and as an investigator for the state and federal governments. He was a fourth degree member of the Knights of Columbus and Past Grand Knight of Council No. 3413.
A native of St. Mary’s, Pa., Deacon Beimel was the father of five children, including a daughter who predeceased him. He was the grandfather of five and great grandfather of six.
To read more obituary articles, click here.
PrevNext