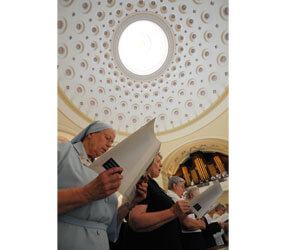 Four existing U.S. provinces of the Daughters of Charity of St. Vincent de Paul are merging into a single province to be known as the “Province of St. Louise.”

To be based in St. Louis, the new province will bring together provinces now based in Emmitsburg; Albany, N.Y.; Evansville, Ind., and St. Louis.

Daughter of Charity Sister Louise Gallahue, the newly-appointed visitatrix (provincial leader) of the Province of St. Louise was installed to her post July 31 at the Basilica of the National Shrine of the Assumption of the Blessed Virgin Mary in Baltimore. Daughter of Charity Sister Evelyne Franc – superioress general of the Paris-based religious community, led the installation, also installing eight new councilors and a new treasurer.

Vincentian Father Tom McKenna was installed as the new director by Vincentian Superior General, Father G. Gregory Gay – Rome-based superior general of the Vincentians and a native of the Archdiocese of Baltimore.

More than 385 Daughters of Charity attended the Mass and celebration.

According to a July 26 press release, each of the four former provincial house locations will remain much the same after the merger. Residences for senior sisters will continue, as will the work of employees.

The Daughters of Charity, who trace their origins to St. Vincent de Paul and St. Louise de Marillac, were established in Paris in 1633 as the first community of religious sisters who were not cloistered. The sisters take vows of poverty, chastity, obedience and an additional vow of service to the poor.

Community leaders believe the merger will allow more sisters to serve in hands-on ministries since fewer sisters will be needed for leadership positions.
The sisters work in ministries as far west as El Paso, Texas, and as far east as Boston.

The archives of the four, unified U.S. Daughters of Charity provinces will be located in a new state-of-the-art archives (construction expected to be completed in 2012) in Emmitsburg.