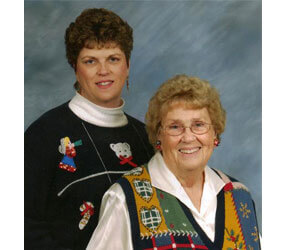 When Elise Buckner turned 16 in 1976, she wanted a unique birthday gift.

She didn’t pine for a car or a big party. Instead, she asked her parents, Fran and Lawrence Cornwell, to become Catholic.

Fran accepted, completing a circuitous faith route. Raised in Cumberland, she attended many different Christian churches, but never had a denomination to call home.

“When I was growing up, I was going to Catholic church and even attended Catholic school (for a year),” Fran, now 86, said.

There was one thing that kept her from joining the faith: no one had invited her.

“Wow, I was so happy that I had made my birthday request and that she finally felt invited to join the Catholic Church,” said Buckner, who married in 1997.

She was born in 1960, after her parents had moved closer to Baltimore. Family friends and Catholics Mary and Paul Jurak asked the Cornwells to have Elise, the youngest of their three children, baptized at St. Clement I in Lansdowne. Mary and Paul served as the baby’s godparents.

“They led by example,” Buckner said. “I have to say, most of the things I am proud of in myself, I can credit back to my parents.”

Fran would attend Mass at St. Clement after delivering Elise to religious education classes. Afterward, she accompanied Elise to Mass.

“I guess I liked the service,” Fran said of why she went to Mass twice.

Buckner attended local public schools, but was active in the church. When she was 13, she began studying to become an assistant religious education teacher. At 16, she was helping instruct third-graders.

After graduating from Towson University, Bucker pursued her dream of teaching, first at John Paul Regional School in 1982. She has spent the last 28 years at St. Rose of Lima School, where she once headed up the parish’s religious education program.

Fran’s experience of seeking an invitation has remained a powerful reminder for Buckner in her career.

“I try to be attuned to parents coming in who are putting their children in Catholic schools, but they aren’t Catholics,” Buckner said. “I tell them, ‘If nothing else, learn the faith your child is also learning about. See if it’s good for you.’ “

Buckner was asked to become director of religious education at St. Clement three years ago and returned to the parish where it all started.

Fran has continued her own Catholic education. When Buckner brings a speaker in to talk about the faith, Fran frequently attends.

“They all recognize me,” Fran said with a laugh.

She now lives with Buckner’s family, lovingly describing her daughter as “my buddy.”

Buckner looks at her mother and Mary Jurak as inspirations to educate others.

“My faith and my church are so very important to me,” she said, “and I am so grateful to be teaching in a Catholic school where I can share that love with my children and their families.”