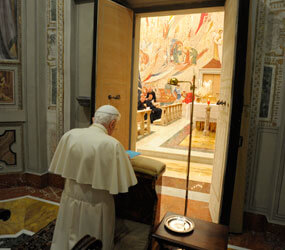 VATICAN CITY – The saints aren’t just people to turn to when something is lost or a situation seems hopeless; they are examples to follow in prayer and in efforts to reform and renew the church, said the priest who was preaching Pope Benedict XVI’s Lenten retreat.

Carmelite Father Francois-Marie Lethel, secretary of the Pontifical Academy of Theology, led the pope and his top aides in their Lenten reflections March 13-19.

He said his 17 talks during the week would focus on the saints and Pope John Paul II.

In addition to helping Pope Benedict and Vatican officials prepare for Easter, Father Lethel said he wanted to help them prepare for the beatification May 1 of Pope John Paul.

“This beatification, which will be an event of immense importance for the church and the entire world, requires deep spiritual preparation involving the entire people of God and, in a particular way, the Holy Father and his closest collaborators,” Father Lethel wrote in the introduction to the retreat program handed out to participants.

The tradition of having weeklong, preached “spiritual exercises” for the pope and members of the papal household began with Pope Pius XI in 1925. But for more than 35 years it was an Advent, not a Lenten retreat.

Pope John XXIII broke the Advent tradition in 1962 when he spent a week in September on retreat to prepare for the Second Vatican Council. His successor, Pope Paul VI, made the retreats a Lenten staple in 1964 and hugely broadened the list of preachers, who almost always had been Jesuits.

Father Lethel is the first Carmelite to be chosen to preach the pope’s retreat, and three famous Carmelites figured prominently in his meditations: Sts. Therese of Lisieux, Teresa of Avila and John of the Cross.

The three were chosen, though, not because they were Carmelites, but because of their influence on Pope John Paul, Father Lethel said in an interview with L’Osservatore Romano, the Vatican newspaper.

He told the newspaper that the late pope is both an example of holiness and a reminder of how much Catholics today need the courage of the saints.

In the booklet for participants, Father Lethel wrote that two of the profiles in courage he would offer them would be St. Catherine of Siena and St. Joan of Arc.

“Catherine, with her commitment to the reform of the church profoundly wounded by the sin of its members, and Joan, in her passion and death caused in part by priests and theologians” who disagreed with her politically and so helped her be condemned as a heretic, “give us a profound lesson on the mystery of the church that is always holy and always in need of purification,” he wrote.

“With their voices, which are strong and dramatic, yet also sweet and maternal,” the two women saints would point retreatants toward “the urgency of conversion and holiness,” Father Lethel wrote.

The Carmelite noted that in January, Pope Benedict himself pointed to Sts. Catherine and Joan of Arc as “examples of ‘strong women’ in the midst of great suffering and crises for the church and society.”

“With these saints, the light of Christ comes to face the darkness of sin – found even within the church – to purify it, to reform it. Obviously this is very relevant today,” he said in an interview published March 16 in the Vatican newspaper.

While the Second Vatican Council emphasized how every single Catholic is called to holiness, he said, it was Pope John Paul who really made Catholics – and others – aware of the fact that people in every culture and walk of life have answered and continue to answer that call.

During the more than 26 years he was pontiff, Pope John Paul beatified 1,338 individuals and canonized 482.

“The beatification of John Paul II is the crowning of an extraordinary pontificate carried out under the sign of holiness,” the Carmelite said.

For the cover of the retreat booklets, Father Lethel chose a detail from Fra Angelico’s “Last Judgment.” The selected scene, sometimes described as “the dance of the saints,” shows the holy ones holding hands and moving up toward heaven.

He said Pope John Paul’s pontificate was filled with reminders that “the saints give each other and give us a hand to guide us on the path of holiness. This is the meaning of Lenten conversion: to commit ourselves even more to engaging in this ‘dance of the saints.’ ”