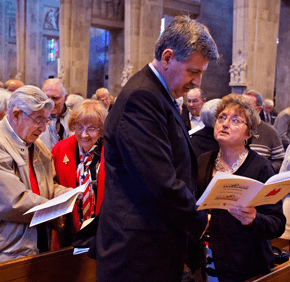 By Paul McMullen
pmcmullen@CatholicReview.org
An active lifestyle and faith create an enduring bond.
That was the takeaway from the Mass celebrating World Marriage Day at the Cathedral of Mary Our Queen in Homeland Feb. 10, which included Joseph and Dolores Gertz, who will celebrate 67 years of matrimony May 19.
Mr. Gertz is a convert from Judaism. Mrs. Gertz learned her Catechism at Sacred Heart of Jesus in Highlandtown, and is a daily Mass-goer at their home parish, Holy Family in Randallstown.
She birthed five children and they adopted two more through the St. Vincent orphanage. He is a member of the Knights of Columbus, and along the way she led the Holy Family Sodality for some 20 years and helped educate the parish school’s eighth-graders.
“I always tried to make my life a party,” Mrs. Gertz said. “How are you going to evangelize, if you’re dealing with crabapples?”
She is 85, and her husband will turn 90 in July.
The Gertzes met dancing at the Alcazar, the former Knights of Columbus home and hall in Baltimore, and on most Sunday afternoons, can be found doing the jitterbug and waltz at Fred and Margie’s Inn, near where Brooklyn becomes Curtis Bay, no small haul from Randallstown.
They were among hundreds of couples who attended the Mass, which was celebrated by Archbishop William E. Lori.
To view a slideshow of the event, navigate the arrows below.
“Living, as we do, in an age which presents increasing challenges to marriage and to the family, we rely even more deeply on the Lord Jesus Christ who, through his church, unfailingly gives us his strength and his help, especially when we receive him worthily in the most holy Eucharist.”
In his homily, Archbishop Lori expanded on that theme, saying “It is in the Eucharist where you find the source of every vocation in the life of the church. Share in the Eucharist. This is the lifeblood of marriage, and it has enabled you to be faithful all these years.”
Concelebrants for the archdiocese’s 31st World Marriage Day Mass included Monsignor  J. Bruce Jarboe, rector of the cathedral; Father Pete Literal; and Paulist Father John Hurley. Assistants included Deacon Charles Hiebler, who on Valentine’s Day will celebrate 43 years of marriage to his wife, Joyce.
Archbishop Lori extended special thanks to the leadership team of the archdiocesan branch of the Worldwide Marriage Encounter, which includes Chris and Darla Phillips, and their pastor at St. Lawrence Martyr, Jessup, Father Victor Scocco.
Dante and Olga Petrolini of St. Michael the Archangel in Overlea continue to be the longest married Catholic couple in the state, as they will celebrate 75 years in 2013.
While the Petrolinis attended the Mass, not all of the 27 couples recognized for being married 54 years or longer were present.
Donald and Maxine Dishong were married at St. Michael, Frostburg, on June 9, 1944, while the rest of the free world focused on the D-Day invasion of France. He had withdrawn from Beall High School in Frostburg to enlist in the U.S. Army, and served in the European theater from August of that year until April 1946.
“We never had a single argument in all that time,” Mr. Dishong jokes.
The Dishongs proudly note that all five of their children remain married to their original spouse. They have 10 grandchildren, and seven great-grandchildren.
He was a meat salesman and she ran the parish Girl Scout troop. Family vacations were spent in a 1955 Chevy touring North America, as they have visited every state but Hawaii. Asked her favorite National Park, Mrs. Dishong, who turned 87 earlier this month, answered “Yellowstone.”
The Dishongs still call Frostburg’s St. Michael their home parish.
Copyright (c) Feb. 13, 2013 CatholicReview.org
PrevNext