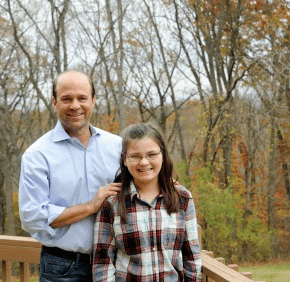 By Paul McMullen
pmcmullen@CatholicReview.org
Twitter@ReviewMcMullen
SPARKS – Not that she wanted to, but Lindsey Duquette couldn’t eat a grapefruit.
Or dig into a bag of potato chips, or go on a sleepover, or shoot a basketball, or ride a bike on the NCR Trail in Baltimore County alongside her father, Jim, while he jogged.
It’s been two years and five months since some limitations began to lift and her horizons broadened, thanks to a kidney transplant. The fact that it came from her father makes Lindsey’s rebound from focal segmental glomerulosclerosis, a rare kidney disorder, and return to relative physical normalcy all the more gratifying.
“When I got my first driver’s license and they asked about being an organ donor, I checked yes,” Jim Duquette said. “I always thought it would be after I was deceased. Not only does this reinforce the impression that you can save a life, but to have it be my daughter’s … ”
Lindsey, 12, is a seventh-grader at Hereford Middle School. Her father, a former Baltimore Orioles’ vice president, works as an analyst on satellite radio’s MLB Network.
The two will be front and center Nov. 20 at a National Kidney Foundation of Maryland fundraiser (santebaltimore.com) at M&T Bank Stadium, bringing a face to a disease which affects half of all Americans.
“The doctors think Lindsey’s recovery is a minor miracle,” Jim Duquette said. “It’s a major miracle in our eyes. We based our hopes on the medical care at Johns Hopkins, and our faith.”
The Duquettes worship at the Catholic Community of St. Francis Xavier in Hunt Valley. Growing up in Dalton, Mass., Jim Duquette attended Catholic elementary school. In addition to Orioles’ general manager Dan Duquette, a cousin, his extended family includes an uncle, Father Don Bosco Duquette, a retired Capuchin Franciscan priest.
Jim Duquette was general manager of the New York Mets in 2004, when 2-year-old Lindsey took seriously ill. Her malfunctioning kidneys led to a debilitating ordeal and years of dialysis and steroid treatment.
Jim Duquette took a job with the Orioles in 2006, which eased Lindsey’s access to treatment at the Johns Hopkins Children’s Center. Her condition, however, worsened to the point where her kidneys were removed in 2011, a year before her father was identified as a donor match.
Lindsey appeared the picture of health on a recent school night, sharing samples of her drawing ability and discussing her first rec basketball tryout, but her condition nonetheless requires constant monitoring and vigilance.
“She has to drink 96 ounces of fluid a day to keep Jim’s adult kidney functioning,” said Pam Duquette, Lindsey’s mother. “At one point, Lindsey was taking 21 meds (prescriptions) twice a day. Now she’s down to three, if you don’t count iron. Lindsey is very good about doing what she needs to do to stay healthy.”
Lindsey wore a sweatshirt from Northwestern University in Evanston, Ill., where the Duquette family had spent the previous weekend visiting her big sister, Lauren, a college freshman. It was a not-so-subtle reminder of her newfound freedom.
“When Lindsey was on dialysis,” her mother said, “with the bags and equipment that required, we couldn’t have traveled there.”
Lindsey was still raving about the apple-cinnamon pancakes she sampled at a pancake house on that family visit. She is devoted to developing her talent on the violin and with a sketchpad, and to starting a branch of Kids Helping Hopkins, just like the one at Hereford High, where her brother, Matt, is a freshman.
“I try not to remember how things were,” she said. “I try to pay attention to all the good things happening.”
Kidney health primer
·        More than 26 million Americans (1 in 9) have chronic kidney disease and most don’t know it.
·        One in two Americans will develop kidney disease in their lifetime.
·        On an average day, 2,200 Marylanders await a kidney for transplantation.
·        10-12 Marylanders die daily awaiting a life-saving organ.
·        More than 60 percent of Maryland dialysis patients are African American.
·        Diabetes and uncontrolled high blood pressure are the leading risk factors for kidney failure.
Source: National Kidney Foundation of Maryland
Also see:
Jim Duquette and other Catholic sports talkers
Poor kidney health not written in stone
Kidney recipients, now friends, train for transplant games
Virginia man receives kidney from pastor
Hunt Valley woman donates kidney to fellow parishioner
PrevNext